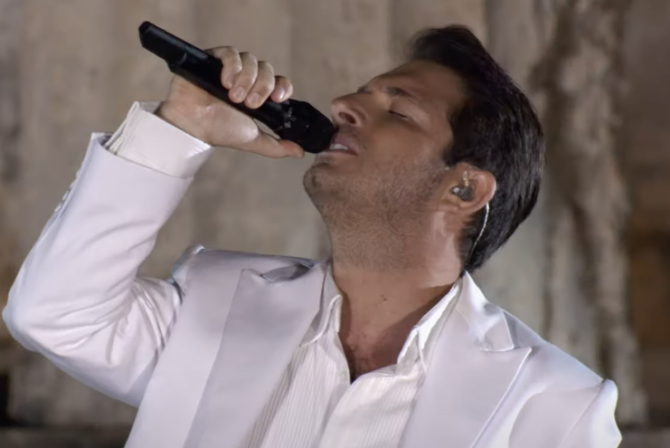 Greek-French singer George Perris is speaking his truth — the accomplished performer (those pipes!) has publicly come out as gay.

Just ahead of the release of his ninth album, No Armor, which drops on Wednesday, the 38-year-old is opening up about his experience coming to terms with his identity.

“I grew up believing that there was something wrong about me because, at the time, when you were a kid in the ’80s or ’90s, you came to believe there was something wrong with you,” he told People. “Back then, people would always use words like ‘tolerant’ or ‘open-minded,’ and I always hated those terms because I think they hide a defiance; there’s contempt to it. I don’t want you to tolerate me. I want you to accept me because we’re 100 percent equal.”

Growing up in Athens, Perris said he hid his sexuality due to a dearth of queer representation.

“I was raised in a society where you had no way of seeing the normality of a gay relationship,” he said. “It was not on TV. It was not in the media. It was not a part of any discussion.”

That dynamic started to chance for him in 1998, when pop star George Michael came out as gay.

“My first experience with a public figure coming out was George Michael. I was 15 years old at the time, and to me, that was like a revelation because I had never even thought that it was possible,” Perris said. “I didn’t know You could have a superstar who was an extremely talented and incredible artist and a beautiful man and everything and he was gay, and he was living a normal life.”

Even so, it would be a while until Perris would come out to friends and family. “There was a little bit of backlash” when he told his family in his early 20s, he said, “but everyone was fine, and they all accepted it.”

Now he’s “relieved”, “happy” and “proud” of himself for coming out to the world.

“Even though in my private life, I wasn’t hiding anymore at all, as a singer, as a public figure, it had a cost for me because there was a part of me that wanted to talk about it,” Perris said. “A lot of people told me, ‘You shouldn’t come out,’ ‘You shouldn’t talk about that publicly,’ ‘It’ll destroy your career.'”

He sees this step as living up to his “responsibility, as a human being but also an artist and a public figure, to speak up about this.”

“There’s a lot of people out there that don’t have that luxury,” he said. “Even today, being gay is a cause for death in so many parts of the world.”

He added: “I feel the responsibility, as an artist, to be as honest and as true to myself as I can possibly be and to share that with my audience. There’s a difference between privacy and secrecy. I’m not a secretive person. I’ve never hidden or pretended to be someone else, ever. So I’m sure [me being gay] is not going to be a shock to them or anything. But I feel like my relationship with my fans, my tribe, we just came a step closer. That’s what I feel that this will be because they will have the full picture of who I am, free and completely open.”

On No Armor, Perris has arranged a selection of English-language cover songs that he finds inspiring.

“I felt the need to go back to my roots. I realized that the only music that I wanted to hear was the songs that shaped me, the songs that made me who I am,” he said of No Armor. The album includes Billie Eilish’s “My Future,” Joni Mitchell’s “Both Sides, Now,” ABBA’s “I Have a Dream” and “Somewhere” from West Side Story. “My only goal in music has always been to create emotion and to move people. For me, this is my healing album.”

Check out his gorgeous version of “Somewhere” below: