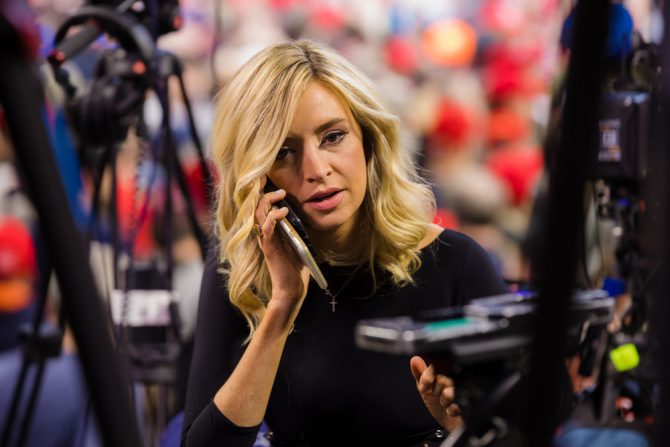 Newly unearthed footage of McEnany bashing Trump throughout 2015 has emerged online and it’s probably not going to make her new boss happy.

Shortly after Trump jumped into the presidential ring in June 2015, McEnany went on CNN to say his remarks about Mexican immigrants were “racist,” “derogatory,” and “hateful.”

McEnany also argued that “mainstream Republican[s]” weren’t in favor of deporting undocumented immigrants, an action she called “not the American way.” Instead, she aruged, many support “some path to citizenship.”

“Donald Trump has shown himself to be a showman. I don’t think he is a serious candidate. I think it is a sideshow. It’s not within the mainstream of the candidates.”

Another time, McEnany called Trump a “Republican in name only,” as demonstrated by his past donations to Democrats and his liberal stances on many policy positions.

“He supports eminent domain. He supported tax increases before. He’s donated $300,000 to Democratic candidates. So, the fact that the Republican Party is now having to claim him, is both unfortunate, and to me, inauthentic.”

She continued, “Because this is not a true Republican candidate. And the fact that he’s being portrayed as such in media is troublesome and not accurate.”

And another time, McEnany went on Fox Business to say Trump didn’t “deserve” to be polling second in New Hampshire and that his rhetoric was “not welcome.”

“Donald Trump is number two and doesn’t deserve to be there. I appreciate his boldness and I think some of his rhetoric got the base excited, but it is not welcome rhetoric.”

She then went on to argue he was “turning away voters” and that Republicans needed a candidate who could bring people together.

“Donald Trump is the last person who’s going to do that,” McEnany insisted.

Here is Trump @PressSec Kayleigh McEneny criticizing Donald Trump in 2015, calling Trump statements "racist," with no expiration date and "a showman," not "a serious candidate."

"I don't like what Donald Trump said…I don't want to claim this guy." pic.twitter.com/dkXN3qE6oH

Well, what a different a few years makes!

After Trump clinched the nomination and was elected president in 2016, McEnany became a full-time employee at Fox News, where her attitudes towards him drastically shifted. Eventually, she became one of his fiercest defenders. Then she joined his 2020 reelection campaign as its main spokesperson. Now, she’s his press secretary.

McEnany has not commented yet on her past remarks resurfacing, though we’re 100% certain she’ll find some artful way of spinning them, just as many of Trump’s other former critics-turned-allies have, including folks like Kellyanne Conway and Lindsay Graham.

Meanwhile, Twitter sure has a lot to say about the matter…

.@PressSec You called @RealDonaldTrump “racist” in 2015. Why do you work for him today?

In other words, @kayleighmcenany is perfect for a job that requires that you have no integrity. https://t.co/eOUP9XqFxH

I’m gonna leave this right here. 💙🤪#KayleighMcEnany He should have done his homework on her before he hired her. I mean, that’s what any real business man would have done. Just saying. pic.twitter.com/aWD79jeM6D

.@PressSec willingly and quickly sold her soul to to become infamous and temporarily powerful in DC. But she doesn’t realize she’s on the Hindenburg and they’ll all go down in flames.

At what point did @kayleighmcenany change her mind about @realDonaldTrump https://t.co/3O9Gd6Y5eT