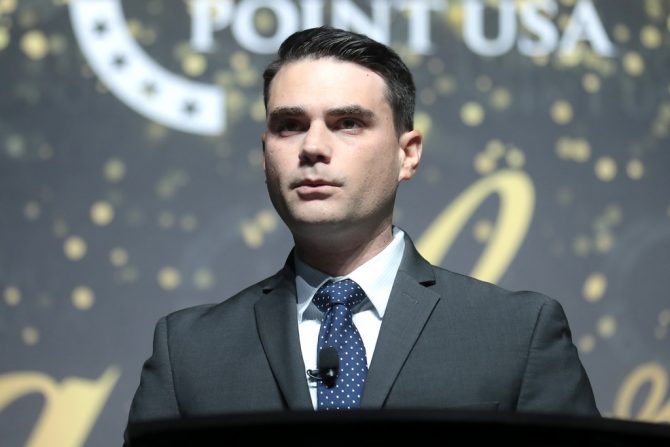 It turns out conservative pundit Ben Shapiro isn’t quite as fond of free speech when he’s losing a debate on his own turf.

The antigay commentator was speaking at a Young America’s Foundation event at Iowa State University on Tuesday when he got into an argument with a Democratic activist and former Elizabeth Warren campaign staffer about the definition of “wokeism.”

As Shapiro puts it, wokeism is the belief that “all inequalities of today are attributable to not only historical injustices but also continuing injustices in the now.”

The Democratic activist pushed back, refuting Shapiro’s definition and questioning why it is that conservatives are the only ones who define it as such.

Related: Angry GOP pundit Ben Shapiro thinks he “owned the libs” with his bagged wood, gets mocked instead

“You are not characterizing what I am saying accurately,” he said.

Avoiding the question entirely, Shapiro tried to cut off the conversation, saying “we’re going to have to stop this because it is going nowhere.”

The unnamed activist then said he was “just trying to understand” Shapiro’s perspective, at which point someone working for the event put their hand over the man’s microphone.

The activist complained he was “being censored,” adding: “I thought you were a free speech warrior.”

“This is absolutely amazing,” wrote Media Matters senior researcher Jason Campbell about the clip, which has since gone viral. “You have to watch it. In two minutes, all of Ben Shapiro’s ‘anti-woke’ tirades are just destroyed.”

This is absolutely amazing. You have to watch it. In two minutes, all of Ben Shapiro's 'anti-woke' tirades are just destroyed. pic.twitter.com/3MGCfgyQMj

“Ben Shapiro’s entire persona is built on speaking with miraged authority,” Campbell said in a follow-up tweet. “It’s a trick that works only when he’s not scrutinized. But underneath it all there’s just a vacuum.”

“This is going in weird directions” is a funny way to say “Harvard didn’t prepare me for legitimate arguments.”

The greatest trick Ben Shapiro ever pulled was convincing the world he was some sort of intellectual.

I will never understand how there are people who go out of their way to listen to this guy speak. I want to bash my head through a plate-glass window and bleed out on the shards listening to him for more than 9 seconds.

This image is what Ben Shapiro’s version of “free speech” looks like at one his own shows.
A staffer putting their hand over the microphone of a perfectly polite questioner challenging him in real time.

Which Shapiro doesn’t really get in his home DIY studio.
(Challenge)

I used to go to school with guys like Ben — intelligent people who thought they were far more intelligent than anyone else and that their views, no matter how fallacious, were automatically absolutely right because they were their views.

Just going to leave this definition from Cambridge here, just in case anyone is unsure, as I was, what they’re specifically talking about, and why Shapiro is wrong. pic.twitter.com/cPppHsmXGU

Does Ben Shapiro think “you’re wrong” is an argument? You can’t just cut them off before they give an actual reason, Ben! That’s not what an argument is!

Also, are these stage-hands actually just censoring this dude cause he said Ben’s definition of ‘wokeness’ was wrong? pic.twitter.com/OEmKAYxDel

Elsewhere in the presentation, Shapiro denied the existence of trans and nonbinary people, saying, “A man cannot be a woman and a woman cannot be a man. These are basic facts.”