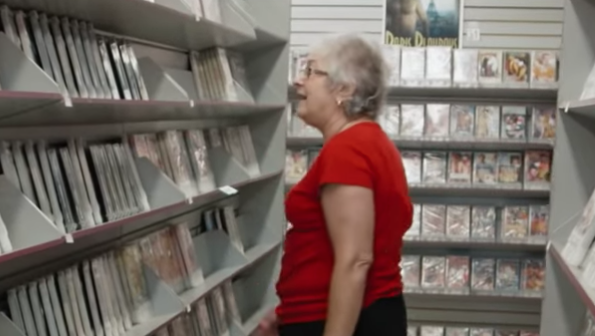 Netflix has just released the trailer for Circus of Books, a documentary about the landmark West Hollywood gay adult shop of the same name.

Director Rachel Mason assembled the film as a family memoir; her parents owned the store for 35 years until it closed in 2019. It features extensive archival footage, as well as in-depth interviews with Karen & Barry Mason, Rachel’s parents, her siblings, as well as former store employees, including future Drag Race star Alaska Thunderf*ck.

“My parents are so immersed in this world and they’re so used to it that it didn’t phase them at all to watch Jeff Stryker doing all these ridiculously graphic dances to his hit song ‘Pop You in the Pooper,'” Mason quipped to Queerty last summer. We managed to catch Circus of Books on the festival circuit. So did Ryan Murphy, who signed on as producer for the film and helped to ensure its release.

In addition to the history of the store itself, Mason and her family open up about how operating an adult store affected their private lives, and how the store inadvertently became a refuge for the LGBTQ community during the AIDS crisis.

“I also knew nobody else really could [make the film],” Mason told us, “because my mom—I think other filmmakers approached her—and she was always reticent to let anyone know about the business. So it had to be me.”

Circus of Books spills all the family secrets on Netflix April 22.