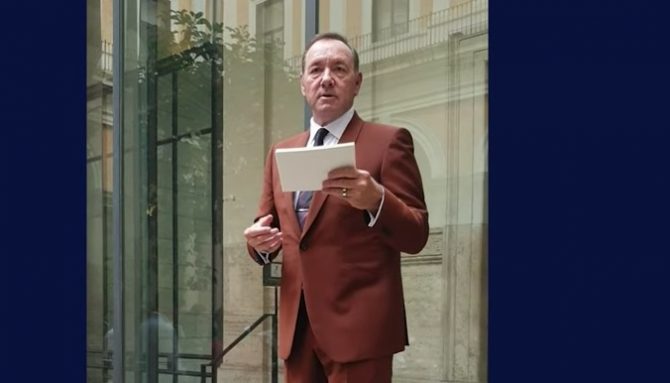 Kevin Spacey has taken his first swing at a comeback, and boy did he aim for the fences.

Spacey appeared in front of the Greek statue Boxer at Rest in Rome and delivered a dramatic reading of Gabriele Tinti’s poem “The Boxer” to a baffled crowd and a few journalists he’d tipped off about the stunt.

The poem, The Telegraph reports, “[is] about an exhausted fighter used for entertainment then left bleeding by the ringside.”

“Standing beside the Greek bronze cast of the ravaged fighter,” the paper adds, “which dates from around 316 BC, Spacey, dressed in a tobacco-coloured suit, intoned the poem to a startled audience at the Palazzo Massimo alle Terme.”

It’s the first public appearance Spacey has made since sexual assault charges against him were dropped.

Some of the lines in the clearly topical poem are: “The more you’re wounded the greater you are. And the more empty you are. I have endured no end of sleepless nights. I have spent hours and hours sweating to destroy and fall,” and “They used me for their entertainment, fed on shoddy stuff. Life was over in a moment.”

No word on whether he made any tips.