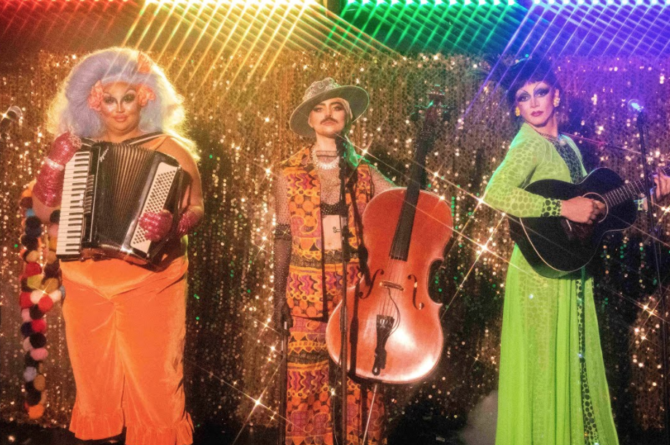 Just in time for pride, we’re thrilled to share the exclusive premiere of the video for indie-pop band Bandits on the Run’s “She’s The Queen.”

Originally written as an uplifting love-letter to inspirational people in the band members’ lives, the song takes on a new meaning in the drag-centered music video, directed by SRDA and shot by Austin Nunes.

“The last live show we Bandits attended before the pandemic was a local drag show in Nashville, and over the past year, we have been consistently moved, inspired and energized by the resilience of the drag community,” explains the band. “‘She’s The Queen’ is a celebration of the tenacity, adaptability and passion of drag performers from around the world who have kept us entertained and smiling through some of our darkest days.”

In addition to NY Drag Stars Junior Mintt, Blake Deadly, Luxx Noir London, and Oliver Herface, the band also recruited submissions from performers around the world, resulting in “a beautiful drag fantasia for the ages,” raising money for the #saveourspaces fund, which provides direct financial support to drag venues and other queer nightlife spaces that have been impacted by the pandemic.

Blake Deadly says, “We see a lot of purported ‘allies’ using queer people as a marketing tool during Pride month, but Bandits chose to put us queens first and immerse themselves in our world. They’ve also shown their commitment to us through their donation campaign for the Save Our Spaces Fund.”