The Return: Work in Progress Season 2

Creator/star Abby McEnany returns for another neurotic outing in this one-of-a-kind, very queer, very funny sitcom. Season 2 picks up with Abby recovering from her breakup with her boyfriend Chris (Theo Germaine). Though she first contemplates suicide, in true Abby fashion, she can’t quite carry out the act: life has a way of keeping her occupied. Fortunately, Abby also receives a diagnosis of clinical depression, which leads her down a long path toward hating herself a little less. Julia Sweeney also returns as Julia Sweeney, whose character Pat is still the bane of Abby’s existence, though Julia herself remains a trusted friend.

As with Season 1, Season 2 of Work in Progress gets some very big laughs by playing with the line between reality and fiction, and by confronting the absurdities of mental illness. Therein lies McEnany’s true genius: she has the ability to find extreme humor in a dark subject, and in doing so, both demonstrates her own courage and inspires others struggling with depression to do the same. How can a show this heavy also feel so good? Watch, learn, and laugh.

We fell for this indie darling at Sundance earlier this year. The film follows Lane (Hannah Pepper), an aimless queer woman wandering through life who drops in on old friends in the French countryside. Said friends also happen to be her exes, jazz musicians Bertie (Idella Johnson) and her now-husband Fred (Lucien Guignard). The trio once reveled in a polyamorous relationship before friction between Bertie and Lane drove them apart. Reconnecting with Lane, however, ignites a new passion in Bertie and her vocal stylings, which gives their band new life. Fred and Bertie begin to see a future for their relationship–and their music–with Lane; that is, until the arrival of Noa (Sivan Noam Shimon), a beautiful woman with eyes Lane.

Ma Belle, My Beauty confronts the still-taboo subject of polyamory with grace and beauty. That owes a lot to the chemistry among the cast: director Marion Hill adopts a voyeuristic approach to the drama, often shooting a scene from a distance or corner of a room, the way a fly might observe it. That goes for the very frank sex scenes as well. The approach works well: Ma Belle, My Beauty avoids any heavy-handed statements about gender, sex or relationships, preferring instead to just observe its characters and let viewers draw their own conclusions. Shot on location in the French countryside, Ma Belle, My Beauty provides no shortage of lush visuals or complicated relationships in a love story both basic and elusive.

The Legit: On Broadway

Theatre fans won’t want to miss this new documentary from Oscar-nominated director Oren Jacoby. On Broadway chronicles Broadway’s transition from the classic period to the modern era. In the 1970s, the Great White Way and Times Square had decayed from an artistic haven to a seedy mess of prostitution, strippers, X-rated movies and rat infestation. Jacoby traces how that neglect coupled with the AIDS crisis allowed for the British Invasion by Andrew Lloyd Webber & et. al., soaring ticket prices, and later, how Disney led the way for corporate America to revitalize New York Theatre into a tourist spectacle.

On Broadway doesn’t exactly break new ground, but it does offer a fascinating blow-by-blow account of Broadway’s past 50 years. It also raises larger questions about how or if the infusion of tourism and corporate cash have helped fuel theatre’s artistic growth, or hindered it. Jacoby also uncovers incredible archival footage of the Broadway protests of the 1980s, in which stage stars revolted against the demolition of historic theatres in favor of new developments (one scene of Christopher Reeve weeping over a wrecking ball left a powerful impression). Featuring new interviews with Helen Mirren, Ian McKellen, George C. Wolfe, August Wilson, Christine Baranski, Hugh Jackman and more, On Broadway plays as a love letter to theatre, a lament for days gone by, and a cautious look toward the future of an American institution. 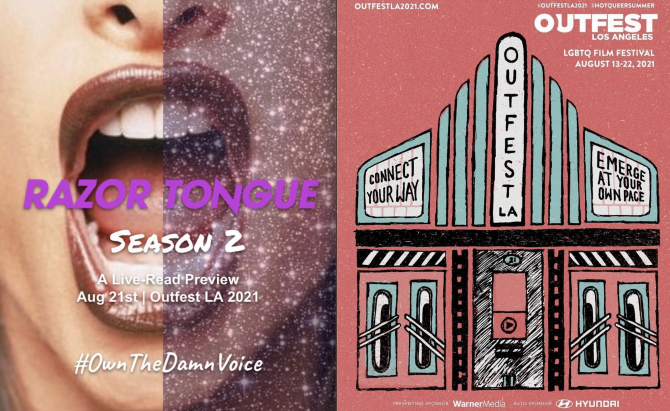 Actor/director Rain Valdez previews the new season of her digital series with a special live reading of the first four episodes of Season 2, presented by Outfest. The new season picks up in the midst of the COVID-19 pandemic, with Belle (Valdez) still reeling from coming out publicly as transgender. Amid the lockdowns, hate crimes against Asian Americans, Black Lives Matter protests, and other chaos, Belle continues to make her way in the world, calling out injustice wherever she sees fit…and struggling with the moral quesitons of Cancel Culture. This special live reading will see cast members Alexandra Gray, Sterling Jones & Carmen Scott return alongside Valdez, with Angelica Ross, Trace Lysette, Jacob Tobia and Candis Cayne joining the company for the read. Given that production on Season 2 of the show still remains in question, the read may well prove the only opportunity to watch the story continue.

Writer/director Del Shores celebrates the 20th Anniversary of his award-winning play with a special live reunion, featuring an amalgam of performers from the original stage version, the film adaptation and the original tour. Emerson Collins, Leslie Jordan, Dale Dickey and Willam all return to chat about a story about southern alter boys dealing with their budding gay urges, and a town of eccentric characters ready to eat them all alive. Viewers can Livestream this special event from home, and even better, the proceeds will go to the Del Shores Foundation, including initiatives to offer grants to upstart queer writers, and to save small theatre spaces affected by COVID-19. It’s a great way to enjoy an evening of gayness, theatre, and do so for a good cause.

In honor of the 20th birthday of Southern Baptist Sissies, we’ve opted to include a very simple “sissy drink” both easy to make and sweet. Chances are, many of you reading this now have mixed something similar under dire conditions…like growing up as a queer Southern Baptist. That’s enough to make anyone need a drink.

Mix equal parts each ingredient over ice. Stir and serve.