Marion Hill is here, and she wants everyone to know.

The French-Vietnamese-born writer/director first emerged as part of the New Orleans artists’ scene, directing two short films, Bird of Prey and Goddess House. Both shorts received a warm welcome on the festival circuit, landing spots at Frameline and Outfest. Now Hill ascends to an even higher level of artistic statement: her first feature, Ma Belle, My Beauty. The film had its world premiere at the Sundance Film Festival, where it picked up the coveted NEXT Audience Award.

Ma Belle, My Beauty follows Lane (Hannah Pepper), a directionless queer woman who decides to drop in on old friends in the French countryside. Unfortunately, those friends happen to be her exes, Bertie (Idella Johnson) and her husband Fred (Lucien Guignard). The trio once had a polyamorous relationship together, before tensions between Bertie and Lane drove them apart. When Lane arrives, Bertie and Fred are struggling to put together a jazz group before a tour: Bertie’s aloof vocals frustrate Fred and their bandmates. Reconnecting with Lane, however, ignites a forgotten passion in Bertie which strengthens her voice. Fred and Bertie begin to see a future for their relationship–and their music–with Lane in tow; that is, until the arrival of Noa (Sivan Noam Shimon), a beautiful woman that catches Lane’s eye.

We sat down with Hill to discuss her transition to features, her views on sexual fluidity and polyamory and Hollywood’s double standard when it comes to male vs. female sexuality. Ma Belle, My Beauty is currently seeking distribution. It will next play the SXSW Film Festival March 16-20.

So this is your first feature film. Where did you conceive the story of Bertie?

Good question. Bertie and Lane came to me here in New Orleans. I knew I wanted to tell a love story, and I knew where I wanted it set. But I didn’t know who the characters were going to be. I had a vague idea; I’d written 50 pages of something, but I realized I needed to know who these people were before I moved any further. Then, I actually met Idella Johnson at a film festival here in New Orleans. I was just really intrigued by her. Then I ran into her later and she had a kind of “Birtie energy”—it was the exact energy I was looking for. So we ended up collaborating on the rest of the script development.

The same thing happened with Hannah, just a bit later. So it was really the three of us talking about who these characters were, what they wanted in life, and the relationship came out of that.

Polyamory is obviously still something of a taboo subject when it comes to the movies. It’s a central element here. How much resistance did you encounter in getting it made?

It’s mixed. I think that goes to show where we are [as a society]. Folks who aren’t familiar think of sex very quickly.

It was my wish to open the conversation further, that it’s not just people having sex. There are partnerships, relationships that function this way. For me, it was important not to demonstrate what polyamory is, but to allow people into it by showing these characters in a polyamorous relationship. It’s really about them. I would say there’s more pushback on the marketing side. They’re not sure who is going to be alienated, and that is very much yet to be seen. To me, I don’t feel like I need to make the “Polyamorous Film of 2021.” So I’m interested to see how people respond.

You mentioned the setting earlier. There’s something so perfect about the setting in southern France. What is it about the French and France itself that lends itself to telling sensuous and sexual stories?

I don’t know why, actually. I find my experience with the culture has not been as open here. That could be because my community is mostly here. My family is French by way of Vietnam, so I largely grew up and have ties there. For me, that was why it was set in France. I had the place and just followed. I think that’s why it feels appropriate—it’s organic. The characters funneled into the place. There’s also something physical—there are a lot of sequences I was exploring in terms of the way the French physically embrace one another on meeting. It’s so interesting to have Americans who are so fluid suddenly walk into a space and start kissing strangers and being uncomfortable. I thought that was very funny.

It fits with the film’s theme of sexual and romantic exploration. There’s a scene in the film of Bertie, Lane, Noa and Fred are all swimming together. There are lots of looks, lots of gazes, lots of sexual tension among all of them. When you have a story this rife with sexual tension, how do you go about directing that subtext among your actors?

It really varies on the actor. Obviously, actors respond to things differently. With some, I was quite specific: “Touch her on the shoulder and see how that feels.” Actually, the majority of what you’re talking about is a result of the four of them having spent time off-screen together. Especially with Idella and Hannah, we did a lot of comfort work talking about relationships they had before. By the time we got in a room together to shoot, we could try different things and not be afraid to see what worked and what felt awkward. It’s really communication.

That’s fascinating. I want to ask about your camerawork a bit. You use very wide, distant shots—almost cinema verite style. You also, I noticed, do some interesting tricks with the sound—for example, the scene where Lane dives in the water, and the music distorts as if we’re hearing it underwater. Why that approach?

Well, I will say my DP Lauren Guiteras is very specific and intentional in terms of how the camera interacts with the characters and what’s going on in a scene and how the camera reacts to that dynamic. I also knew the house so well that I had really clear shots in my head. From there, it was awesome. Whenever we had a conversation about where the camera would be, it was really a question about tension character-wise. Lauren was just able to suggest the point of view at that moment.

Well, I talk to each of them individually at length beforehand. I wanted all of us to be on the same page. We had an awesome opportunity to show aspects of sense people haven’t seen before. After we got in the room, it was a closed set, so really just the two actors, myself and Lauren. The whole thing was a conversation between the three of us. Then, I would step out and have a conversation [with Lauren]. Everyone knew exactly what they were doing to the point it felt like we were doing any other scene; the actors really sunk into it. And it is such a vulnerable scene.

If the actors aren’t quite comfortable, they’re unable to get into the emotional space. And they did great. 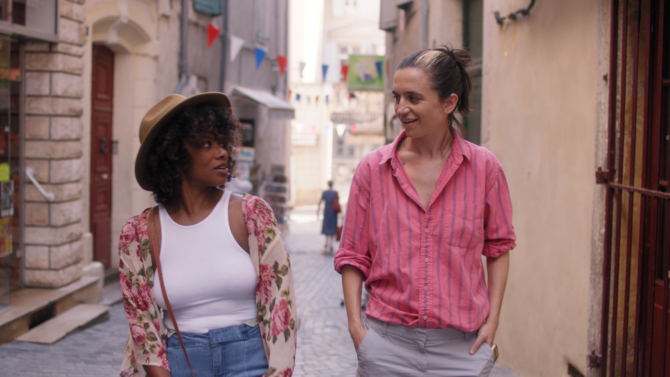 I need to ask too about one of the most enigmatic characters here, Fred. He refers to Lane as “our” ex more than once, though he and Lane don’t seem to have any kind of connection or attraction. They aren’t exactly hostile to each other, either. My question is, how do they really feel about each other?

Good question. I wouldn’t say my statement is one of gender norms. For me, it was important to just have a relationship drama that didn’t revolve around a man. It’s amazing how lesbian dramas still manage to revolve around men at some point. That was what I was most emphatic about—that he not be the center. Once that was clear, it was very organic the way he became a confident support. That is also Lucian’s personality: he’s very supportive on set. For me, it was also exciting to explore the relationship between him and Lane as one that is not erotic or physical but very intimate. They have mutual respect.

I need to ask about another unseen character: the score. This film has such a beautiful, original jazz score. How do you go about working with a composer to create a score that doesn’t just reflect the action of the film, but feels like a character within the film itself?

Well, the composer was my first collaborator: Mahmoud Chouki, who’s also based in New Orleans. We’re friends and have this connection wherein we’re both artists that came to New Orleans but are immigrants from the French side of things. So we have a very specific relationship. So we started talking about the idea. He started to write long before the script was even finished. I think we had a foundation: I knew what the film sounded like, and when I met him, I knew his music sounded like my movie. Then we just had an amazing adventure. Because the film is cross-cultural, and because New Orleans is cross-cultural, we were able to travel to different styles. It was also just a very organic thing. I’m very specific in that I know what a scene sounds like. So I would give him a specific genre, or a song I loved, and he would be able to bring musicians together to do it.

I want to ask a delicate question here, and this is pure speculation. How do you think the film would have been received if you’d cast the opposite sexes? In other words, if it was about two men? Do we see female sexuality differently?

I do not know. In the LGBTQ world that’s the thing—we’re the “L,” the “G,” the “B,” whatever. From where I’m sitting, we see more gay male culture present in a way that women’s is less so. So it’s a really hard question. But then again, gender is going to be deconstructed in the next 20 years anyway. So it won’t really matter.

Do you think we, culturally, have a fear of men showing affection or being intimate?

I think so. I don’t want to speak for gay male culture, but from the outside, it seems like there are a lot of prescribed ways you’re supposed to be. I think when people see a gay male story, it’s like I know how this will go. We’re starting to see a lot more characters who are fluid. We’ve been steeped in queer stories about coming out, or the struggle. When we get to focus on characters and relationships, I think we’re moving in the right direction.

So this is your first film. This is an auspicious debut. You’re at Sundance. Where do you go from here?

Good question. I’ve been thinking about that a lot. My dream is to keep making movies. Being a writer/director enables me. This film is also my spiritual debut in that I think my work will build off of this. I want to explore different kinds of relationships in my work and put nuance on screen. And I want to keep making movies I want to see.

Ma Belle, My Beauty is currently seeking distribution. It will next play the SXSW Film Festival March 16-20.

the Queen has spoken
25