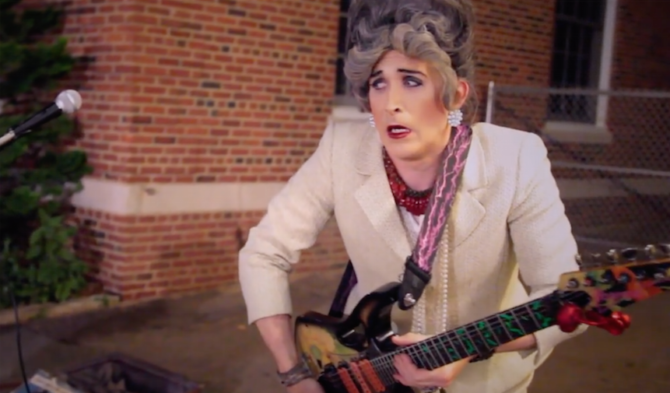 We’re sure there’s an in-the-know crowd out there thinking: “Oh believe, we’ve been ready for Mrs. Smith since the day we were born.”

But the guitar-shredding goddess is just coming onto our radar now, and good god are we happy to see her blip.

And we aren’t the only ones hopping on board this steam-loaded train to glory.

Here’s a story from her website that sounds so utterly unbelievable it can only be true:

I was playing guitar in the East Village of NYC when visionary director Petra Collins asked if I wanted to wander in a GUCCI dream with her. Of course I said yes.

Filmed over three glamorous days in Budapest it is a surreal feast for the eyes.

We mean… there’s cool, and then there’s “got scouted on the street for a Hungarian Gucci commercial by Petra Collins” cool.

Another performance outside the Huntees store in Los Angeles (they also happen to sell Mrs. Smith’s merch), has been an obvious social media wildfire, too.

Count yourself lucky if you’re catching wind of it now:

As if that all weren’t enough, Mrs. Smith has promised Queerty she has a new music video coming out next week that is, and we quote, “BONKERS.”

For once, we’re inclined to believe the hype. And you’d better believe we’ll be keeping you posted on that.