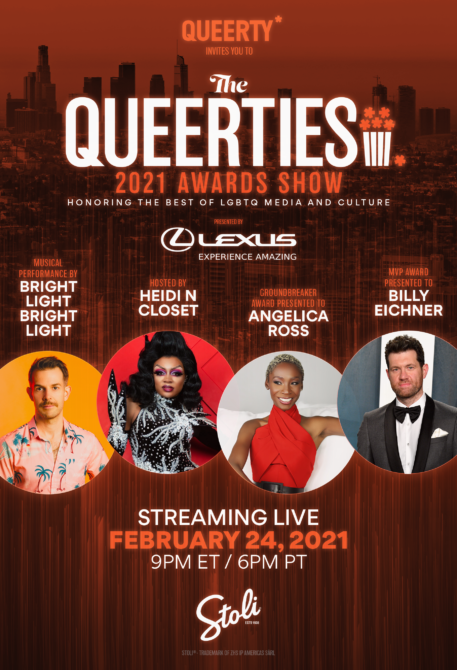 While we’ll certainly miss seeing all the incredible Queerties nominees in person this year, there’s one silver lining to hosting a live-streamed awards show in 2021 — everyone gets to attend!

Consider this your official invitation to join the first-ever virtual Queerties Awards Show presented by Lexus, recognizing the year’s best in LGBTQ culture. And it wouldn’t be an awards show without some very special guests.

RuPaul’s Drag Race star and “Future All-Star” nominee Heidi N. Closet will co-host the evening alongside Queerty’s Dan Tracer, announcing winners in everything from Film/TV to drag to social media. You can find a full list of categories and nominees here.

They’ll be joined by two very special honorees — Pose star Angelica Ross will accept the Groundbreaker Award, and Billy Eichner will receive the MVP Award for inspiring a get-out-the-vote campaign while staying safe throughout the pandemic.

The ceremony will stream live at 6pm PST / 9pm EST on February 24 at Queerty.com as well as on Revry (including Revry’s third-party channels on Samsung TV Plus, Roku Channels, Xumo, Stirr, Apple TV). You can also find it on Queerty’s Facebook and YouTube pages.

Head here to RSVP, and we’ll see you on the red carpet!