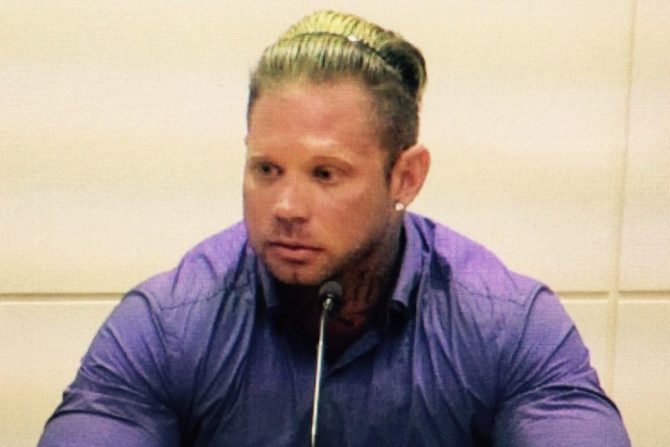 This is pretty unsettling.

“Who wants to suck my d*ck?” former prison officer Conan Zamolo tells the sleeping teenage inmates in the video. “Which one of you boys wanna suck my d*ck?”

Zamolo filmed himself tormenting several male youths then uploaded the footage to Snapchat because… homophobic bullying is funny? Now he’s on trial for misconduct on the job.

Zamolo is, er, was an officer at the Don Dale Youth Detention Centre, a maximum security juvenile detention center in the Northern Territory, Australia, located in Berrimah, east of Darwin. He was canned back in 2014 after being charged with possession of steroids. During the investigation, police uncovered several videos saved on Zamolo’s phone of himself sexually harassing several different teenage inmates.

In addition to telling the boys to perform oral sex on him, Zamolo filmed himself demanding a kid eat bird feces. “Go, go, go! Eat it! Eat that little bit of sh*t,” he ordered.

In another video, Zamolo sneaks up on a boy using a urinal. He films the youth urinating for a moment before the screen goes black and Zamolo can be heard saying, “Oi! What are you doing you little gay dog?”

In court last week, Zamolo said the harassment was all a “joke.”

“Did it occur to you that any of the boys might not have found it funny at all, but might have felt compelled to go along with it?” prosector Peter Callaghan asked.

To which, Zomolo replied, “I had a good relationship with the kids. That’s how they talk to each other … I wouldn’t have done it if I thought that they would’ve been offended by it. Obviously, I knew them quite well.”

The videos, however, suggest otherwise.

“Come suck my dick you little c*nt!” Zomolo can be heard yelling at a teen. The boy is heard replying, “F*ck off, you prick. Motherf*ck*r!”

When asked specifically about filming the boy using the bathroom, Zomolo said he went to check on the kid because he was “taking too long” and didn’t realize his camera was on.

“It was a new watch that I was playing with, that I’d been playing with all day,” he testified. “I can’t even tell you if I knew it was recording or not. I got no idea. I didn’t even know it was on my phone.”

“Mr Zamolo, what was it about Don Dale that made you think it was OK to let this happen?” Callaghan asked.

Zomolo shrugged and said, “I don’t know, it was just goofing around and that kind of thing happened a lot. They’d look for things to do to pass the time. … I can see now that it was inappropriate.”