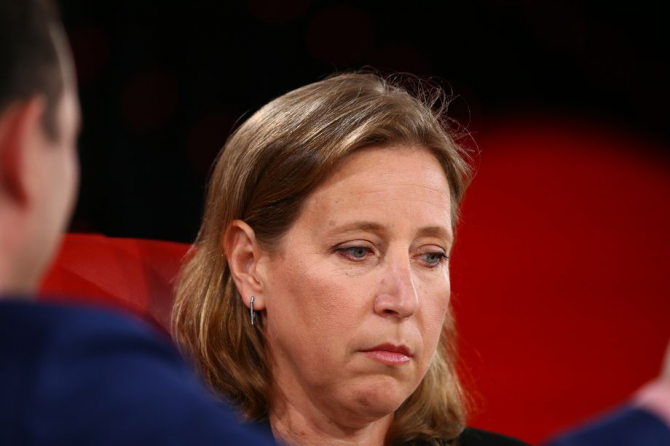 Two weeks ago Maza released a trove of video of Crowder referring to him as “an anchor baby, a lispy queer, a Mexican,” among other racist and homophobic slurs. Maza alleges that the harassment went on for two years before he reported it to YouTube. Initially, the video hosting site declined to do anything about the videos, saying that Crowder’s words didn’t violate YouTube’s policies. The company later reversed course, first demonetizing Crowder’s channel before shutting it down completely.

At the Code Con conference for techies in San Francisco this week, reporter Ina Fried of Axios pressed Wojcicki about the company’s waffling response.

“I’m really personally very sorry,” Wojcicki explained. “It was not our intent. Our goal was…YouTube has always been a home of so many LGBTQ creators and that’s why it was so emotional and that’s why I think this really…even though it was a hard decision it was made harder that it came from us because we’ve been such an important home, and even though we made this decision which I’m going to get into a little more with your question…but…the same…YouTube…we’ve so many people [on] YouTube from the LGBTQ community, and we’ve always wanted to support the community in spite of this hard issue that we’ve had right now.”

Related: YouTube is investigating this right-wing homophobe for harassing a gay journalist

“We don’t want to just be knee-jerk we need to think about it in a very thoughtful way,” Wojcicki went on, “be able to speak with everyone, we’ll speak to people from the LGBTQ community, make sure we’re incorporating that going forward in terms of how we think about harassment and make sure that we’re implementing that in a fair and consistent way going forward. It was a hard week across the board and I am truly, truly sorry for the hurt that we caused that community. It was not our intention at all. Not that I want to take away from the hurt or the challenge of what happened this week but I do want to let you know that many of the changes that we made in the hate policy which is a different set of policies we think will be really beneficial for the LGBTQ community. And there are a lot of videos there, and a lot of ways that community is attacked where we will be taking down those videos going forward.”

"Are you really sorry for anything that happened to the LGBTQ community? Or are you just sorry they were offended?"

After an initially confusing response, YouTube announced a new policy that would ban “videos alleging that a group is superior in order to justify discrimination, segregation or exclusion based on qualities like age, gender, race, caste, religion, sexual orientation or veteran status.”

In addition to shutting down Crowder’s channel, the site has begun deleting other videos, including some by white nationalists James Allsup and Gavin McInnes.