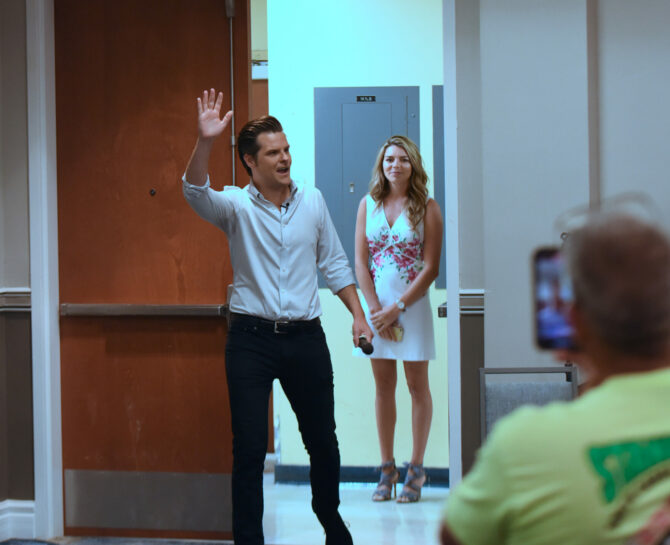 Matt Gaetz kicked off his reelection campaign on Saturday in Walnut Hill, Florida where about 30 people showed up to hear him and Marjorie Taylor Greene speak.

Yes, you read that correctly. Roughly 30 people packed into the Walnut Hill Baptist Church for the event, which began with Gaetz’s wife, Ginger Luckey, performing the national anthem. Meanwhile, a larger overflow room sat empty, according to local media.

Many in attendance weren’t from the area and at least one person had to be escorted out by police after being told it was a private event. It’s unclear whether the person was a protestor or simply confused as to where they were.

Walnut Hill is a small, unincorporated rural community that is almost as far as one can go to the northwest in Gaetz’s Northwest Florida district. Its population is but a tiny speck of the 800,000 or so people in Florida’s 1st Congressional District. It was his only stop Saturday in Escambia County and came after afternoon events in Crestview and Milton. Gaetz said he was proud to visit the far corner of the district to kick off his campaign even though, as he expected, the crowd was small.

During the event, Gaetz spewed his usual extreme right-wing talking points, including accusing the Biden administration of “gaslighting” Americans, saying “woke generals” were a threat to the U.S. military, and some nonsense of Hunter Biden’s laptop.

One topic that was not discussed was the ongoing federal investigation into whether Gaetz paid a high schooler for sex. Earlier this year, his ex-girlfriend testified before a federal grand jury, leading many to believe the Department of Justice is getting close to indicting him.

Multiple sources claim Gaetz’s ex tagged along with him and his alleged 17-year-old lover on a trip to the Bahamas in 2018. CBS News also reports that investigators are looking into whether the anti-LGBTQ lawmaker obstructed justice when he had a secret phone call with the ex and another woman.

I don’t care if you’re a Republican or a Democrat, a conservative or a liberal. Is Matt Gaetz really the best we can do as a Congressman?

If you’re into drugs and sex trafficking, he’s your man.

It’s almost as if people don’t want to come see someone who’s being investigated for 3 counts of sex trafficking. hmm.

If this happened within 500 ft of a school, Gaetz was breaking the law.