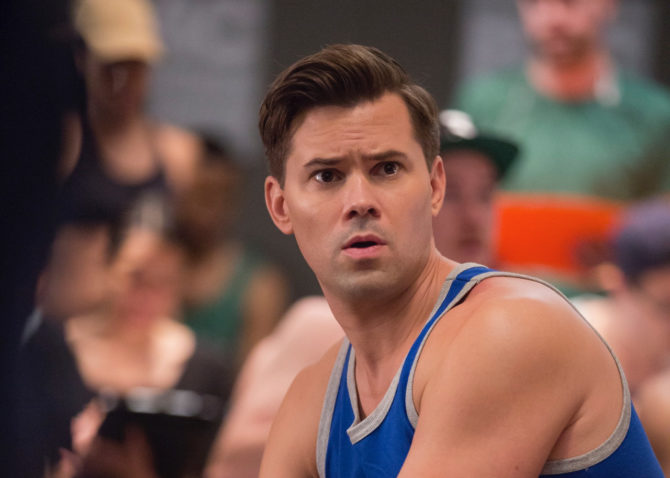 If New York was the fifth rich white lady on Sex and the City, Elijah is the fifth girl on Girls. Introduced in the show’s first season as Hannah’s college ex who had only recently come out as gay, the character, played by Tony nominee Andrew Rannells, quickly became a fixture. In a show that has been characterized by its “unlikeable” characters, Rannells has played Elijah as a viper-tongued, unflinchingly bitchy gay guy whose self-involvement has been rivaled only by Allison Williams’s Marnie—who he fully slapped in one episode! And yet, Elijah never came off as a one dimensional caricature; he was less a stereotype than a very specific type of gay guy that you might actually meet at a gay bar and, unlike the mopey homos on Looking, actually want to hang out with.

The most recent episode of Girls’ sixth and final season devoted more time to Elijah than ever before, following the seemingly feckless man-child from his day job at Henri Bendel to an audition for a musical adaptation of White Men Can’t Jump opening on Broadway. It’s an episode that propels the character into whatever comes next for him once the final credits roll on Girls. On the Monday after “Bounce” premiered on HBO, Rannells called Queerty to discuss his character’s moment in the spotlight, what kind of gay uncle he would be, and why Elijah can’t have a spin-off.

So by 10:30 last night, there were already like two posts about you and your character on Vulture. Did you expect the episode to create such a stir?
It’s very nice that it did. No, I didn’t. I didn’t expect it, but I’m happy that people enjoyed it. I have to say, when we filmed it over the summer—it’s always sort of hard to tell what reactions are gonna be, because I think we filmed that episode in late July, like the first part of August. So, so much time has passed that it’s not like I forgot about it, but all of a sudden seeing it, it’s like, Oh, god! People are actually going to watch that! You sort of forget.

When you are filming, how much of a sense do you get of what the episode is going to ultimately be like?
It’s tricky, because, you know, as an actor you only have control over so much, and then your performance gets put in the hands of the director and the editor. At this point, six seasons in, I feel like I have a pretty good sense of what things might look like based on our different directors. Last night’s episode was directed by Richard Shepherd who’s also one of our producers and I’ve worked with him quite a bit on Girls. So I felt like I sort of know Richard’s style and I sort of know what he goes for. You can kind of get a sense, even while you’re doing it, of what takes might be used. But last night was also sort of a departure—my storyline anyway—from what Girls normally is, and there were a lot of moving parts to the episode. New characters, people we haven’t seen before. Obviously musical elements and dance elements, things that we generally don’t do on Girls. So that was a little bit of a mystery. It was exciting to see it all come together.

In a way this episode felt similar to “Panic in Central Park” the Season 5 episode that focused solely on Marnie. Was this kind of Elijah’s swan song?
He’s still around for the rest of the season, but yes, this is definitely his big moment, and I was very grateful to Lena for sort of giving him this real estate in this final season. I’ve always felt like I’ve gotten to be a very developed character and not just a sidekick, but it’s nice to be give a chance to do a few more tricks and have a little more screen time.

What did this episode mean for the character?
I think particularly in this final season, with Elijah finding out about Hannah’s pregnancy and having that be such a huge wake-up call to basically get his shit together, I think he’s in real denial about where he is in his life and his age and where he should be in the progression of his life. I think he had to very quickly figure out what he’s going to do with himself. He can’t just be kicking around working side jobs and day-drinking for the rest of his life. So this was a big wake-up call for him. It was an important episode for him just to start to figure out what his goals are and what he actually wants to do with himself.

He definitely had a very strong reaction to hearing that Hannah is pregnant. What kind of gay uncle do you think he’d ultimately be?
I think he’d eventually be a great gay uncle. Maybe not so good with a baby.

Like you said, he’s finally getting his shit together at the ripe old age of 28. What was life as an actor like for you when you were 28?
I was a little bit further along, but I think that was around the time that I really had to make a decision, if I was really gonna go all-in for this career. I had done one Broadway show. I had done Hairspray for like a year and a half, which was a great experience, but it didn’t quite move the needle as far as I thought it was going to professionally. I realized that I needed to get very serious and really devote myself to this career if I really wanted to make a go of it. So it was around that time that I applied myself in a much different way.

Corey Stoll’s character Dill showed up again, and he mentions that he thinks he’s broken because his father abandoned him to followed the Maharishi or whatever. Why do you think Elijah is broken?
I don’t think he’s broken. It’s just that there are so many ways to get distracted in the city.

When we first meet him in Season 1, he’s just coming out, which honestly always felt like kind of a false note for this guy. Did you and Lena or Jenni Konner ever discuss why he stayed closeted for so long?
Not really. The way I always thought of it was that he was out to everybody in his life except Hannah. Which I guess isn’t that rare in that kind of college relationship.

I think gay guys have a very complicated relationship with representations of themselves in media. Do you have a sense of how other gay guys have responded to Elijah?
I never really felt any pressure to represent gay men in this role. When I was in The New Normal, that was a show about a gay couple in the surrogacy process. It was dealing with things that were very topical and it was Justin Bartha and I kind of as the focus, so I did feel a little more of that pressure on that show.

People tend to conflate some of the female characters on the show with the actresses playing them, particularly Lena Dunham. Have you experienced anything similar playing Elijah?
We’re lucky that people don’t tend to do that with the guys on the show. People don’t think that Alex [Karpovsky] is Ray. No one thinks that Ebon [Moss-Bachrach] is Desi.

This is the first character that you’ve really lived with for a number of years.
Yeah, it is, and, you know, it’s similar to what I did in theater, where I played characters for years. But you’re playing the same moments every night. With TV, there are always different situations to explore how a character would react. How would Elijah interact with a stranger? What is Elijah like in an audition?

So, what’s it like leaving him behind after playing him for six seasons?
I feel like I’ve just kind of put him in a box on a shelf. There’s always the chance to take him out again someday.

More than one person has suggested Elijah should get his own spin-off. Would you be up for it?
I’d certainly be up for it. I don’t think HBO would be up for it.