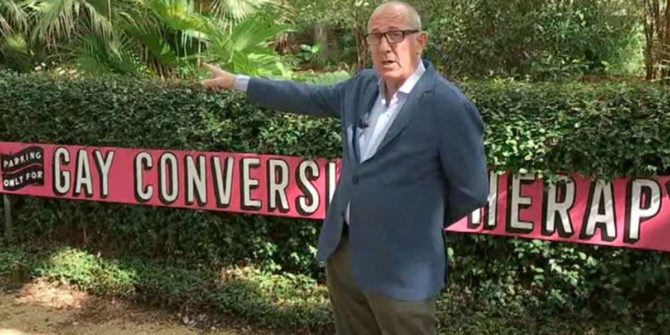 Bible study will never be the same.

The move is just the latest tactic in a lowkey parking lot war between Butler, who owns the lot, and members of the River Pointe church, who continue to occupy the spaces three times a week for Bible study and other church events.

“We tried reason,” said Butler. “We tried anger and neither of those things worked. So we’re trying humor.”

Butler enlisted the help of artist Robert Rosenberg to create the sign, who added: “It’s meant to be satire and hopefully people get it and it’s meant to be ironic.”

They also created a bumper sticker that reads: “Follow me to the Blossom Gay Conversion Therapy Center where we pray the straight away.”

It’s unclear from the local news report if they placed the stickers on their own cars or if they’ve attached them to the cars of churchgoers. We’re hoping the former. 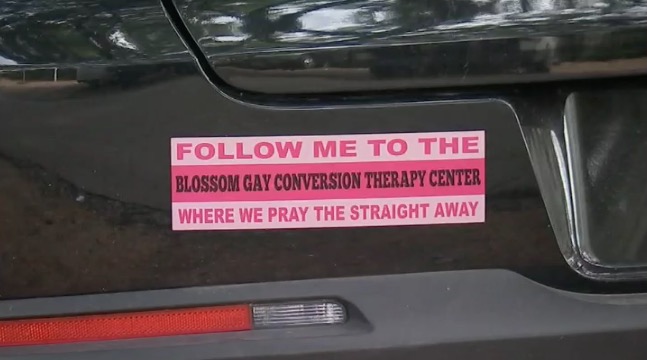 Butler says the problem has been going on for years, and the church has refused to take substantial action to keep its members from using the lot.

“Do unto others as you would have them do unto you. The Golden Rule,” Butler said, adding, “Sometimes the only way to deal with those people is hitting them over the head as hard as you can with a joke.”

The pastor of the church, Patrick Kelley, had this to say:

“We host a bible study across the street from Mr. Butler’s property, in our private residence, and will continue to be diligent to prevent our guests from using Mr. Butler’s four parking spaces.”