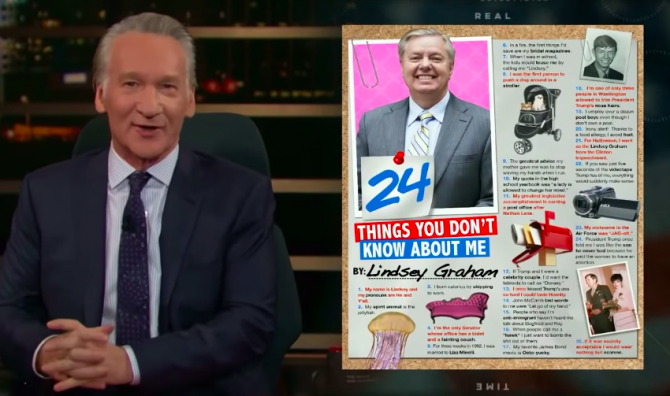 In a segment on Friday night’s episode of Real Time, Bill Maher took a swing at Senator Lindsey Graham’s “hypocrisy on steroids.” But rather than focus on actual things the South Carolina Republican has done to undermine our country’s democracy, Maher decided to share a list of passé stereotypes about gay people in his efforts to attack him… since being gay is hilarious and should be used to belittle people we don’t like.

Reading a selection from a list titled “24 Things You Don’t Know About Lindsey Graham,” Maher rattled off several gay tropes that might’ve been funny (to straight people) in the ’90s or early ’00s, but that today are just stupid and not very helpful.

Of course, Maher isn’t the first celebrity to shame Graham about his rumored sexuality. (For the record, Graham has repeatedly denied being gay.)

Comedian Chelsea Handler has cracked many homophobic jokes about Graham being gay, being a bottom, and having a “d*ck-sucking video.”

And most recently, Broadway legend Patti LuPone took to Twitter to further peddle the gay rumors by calling Graham a “disgrace” and urging him to “just bite the bullet and come out.”

Now, we totally get it. Lindsey Graham is trash and certainly no ally to the LGBTQ community. Not only did he oppose the repeal of DADT and gay-inclusive immigration reform, but he was also against gay marriage, calling it a road to polygamy.

But surely there are better ways to criticize him that don’t involve cracking homophobic jokes at his expense?