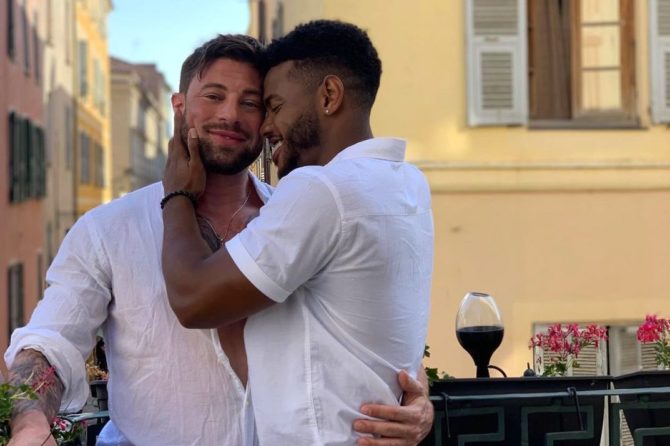 The amount of homophobic vitriol that Duncan James gets online would make any of us unplug, but this British singer shows incredible resilience amid the abuse he often faces.

43-year-old James, who rose to fame as a member of the U.K. boy band Blue, came out as bisexual in 2009 before asserting in 2012 that he identifies as gay. (“When I came out as bisexual at the time, it was just easier to use the word,” he explained to Gay Star News. “I do say I’m gay, but I don’t really care about labels. I don’t really care if people want to call me bisexual or gay.”)

Nowadays, James is in a relationship with Rodrigo Reis, but he also shares teenaged daughter Tianie with his ex-girlfriend Claire Grainger. And to add insult to injury, it’s Tianie who often gets the brunt of the homophobia through social media.

“People can be quite nasty about me being gay and say quite horrible things about the fact that I’m a gay dad,” James told The Sun earlier this year. “People have written to her, saying, ‘Isn’t it disgusting your dad’s gay? How do you feel? You must be ashamed of him,’ and stuff like that.”

Nevertheless, this ex-Hollyoaks star is proud to be gay… and proud to be partnered with Reis, a Brazilian man living in Belgium, where he and James first met after a Blue gig.

“Rodrigo is such a lovely boy,” the singer told The Sun. “He’s just so smiley, happy, with lovely energy. He’s met my daughter, and they really get on, so it’s just fantastic. I didn’t identify as gay for many years because of my issues with coming out, but finally I’m happy in my skin.”

And James has been doubling down on his out-and-proud status on Instagram, where he routinely posts photos of him and Reis getting cozy.

“Proud to be happy and in love with another man, after years of hiding who I really was,” he captioned a May 6 post showing him and his beau. “I hope this pic can inspire other LGBTQ couples to be proud of who you love, who you are, and how love, health, and happiness are the most important factors in life. So be proud of you, and give two fingers up to those who want to dampen your spirit with negativity.”

We’re proud of James for rising above the hate, for showing a gleaming example of gay fatherhood, and for proving that sexuality can be a journey.

Scroll down for more pics from James’ Instagram page…