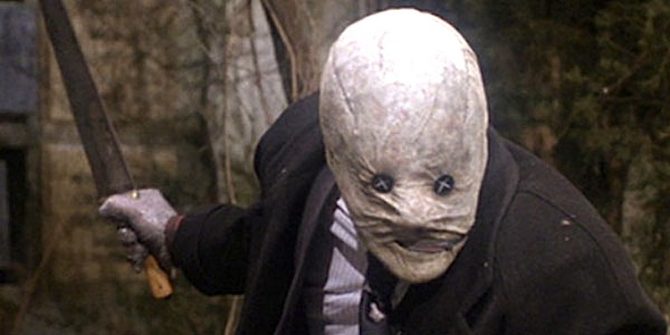 Clive Barker may have scored a hit with Hellraiser. He made have made his best movie in Lord of Illusions (also one of our pics for Screen Gems). For his most imaginative cinematic experience, however, look no further than Nightbreed, Barker’s horror-fantasy epic with a very troubled production history.

Nightbreed follows the adventure of uber hunk Aaron Boone (Craig Sheffer), a man plagued by visions of a lost city called Midian. He appeals to his psychiatrist Dr. Decker (David Cronenberg, best known as the director of Scanners and The Fly), who suggests Aaron has fallen into psychosis, and that his visions mask his moonlight activities as a masked serial killer. In reality, though, Dr. Decker is the real killer, using Aaron to take the fall for his crimes.

Aaron seeks out Midian, and discovers a real underground city populated by Nightbreed–a society of magical monsters. Like vampires, should a Nightbreed bite a human, the human will become Nightbreed as well…which is exactly what happens to Aaron. From there, Aaron’s girlfriend Lori (Anne Bobby) races Dr. Decker and a monster-hunting priest (Malcolm Smith) to find Aaron and protect Midian from destruction at the hands of religious zealots and sadistic cops.

Like all of Barker’s work, Nightbreed teems with sexuality and thinly-veiled queer characters. The most horrific moment in the film–and actually, the most moving–concerns an obviously gay Nightbreed and his pet terrier. Moreover, the winding, dim and occasionally steamy corridors of Midian feel like a Steamworks maze (Barker has some experience with bathhouses…we’re guessing), while the tribal community of the Breed–complete with physical transformations and overt eroticism–is also an obvious analog for the LGBTQ community. Given that the monsters are the real heroes of the movie, we take that as a compliment.

Nightbreed underwent massive and stupid cuts when it debuted back in 1990. Fortunately, the film has had a proper Director’s Cut restoration on Blu-Ray, which reinserts 40 minutes of deleted footage including an alternate ending. Queer (in every sense of the word), flawed, but always inspired, Nightbreed makes for perfect Halloween viewing.