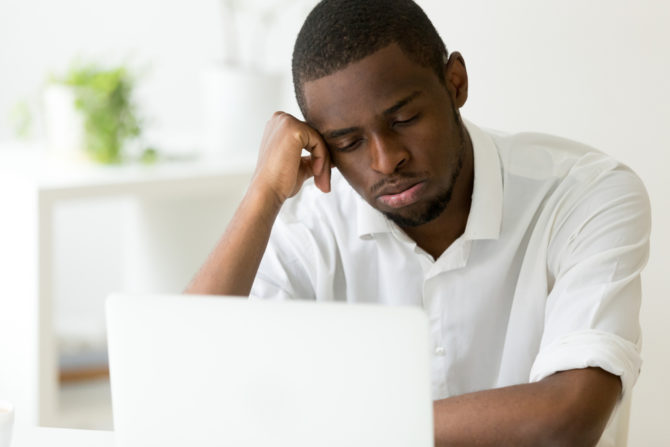 I recently made that announcement to a friend, a straight single black female from New York City, after telling her that I tend to tune out when TV characters start ripping off each other’s clothes. I’d rather use my imagination and go straight to the afterglow.

“It’s the reason why I hate adult films.”

“What? Are you serious? How is that possible? I mean, why the hell not?”

I’d been asked all of those questions before (though usually by gay men), and I’ve yet to offer an answer that didn’t sound kind of corny when I heard myself say it.

“I’d rather do it than look at other guys doing it” is what I usually tell guys on Grindr when they invite me over for a 420/adult-film double bill.

Although my anti-voyeur tendencies are more complicated than this stock excuse, there’s a kernel of truth to it. I’ve never been into passive entertainment. I began my journalism career covering music, and I always secretly dreaded being part of a captive audience at sit-and-listen shows. My last concert, an Ed Sheeran gig at the Sydney Opera House, was torture.

I doze off at comedy shows, and I fidgeted my way through the one opera and the one ballet I’ve attended. Inexplicably, the theater is pretty much the only place where I’m happy being purely a spectator, preferably for plays over musicals. I once saw Kathleen Turner fully nude in The Graduate on London’s West End, but no-one onstage actually had sex.

I’d rather catch a good band at a dive bar where I can listen while drinking and mingling with friends, or get my laughs watching sitcoms at home as I multi-task. There’s no place like home for movies (since I’m partial to artsy stuff that plays just as well on smaller screens), and for music, too–unless I’m in the gym, or walking, or running.

Sex is even less of a spectator sport for me than running. I’ve been to several gay sex shows in Thailand, and I enjoyed each one, but that was mostly because of the interactive element. I didn’t merely watch.

The last one I went to, in Pattaya, featured a Thai go-go boy with one of the biggest bulges I’d ever seen. As he passed by, I stuck a few hundred-baht bills into his underwear just so I could stroke what he was barely hiding.

So it’s not that I’m a total prude. I’ve had a few guys suggest using an adult film to set the mood, but I nix that for the same reason I gave up threesomes. I went out with a bang in Bangkok several years ago after hooking up with an Aussie and a fellow black American expat (from Philly). These days, I prefer to have my partner’s undivided attention while we’re naked.

But I can’t completely pin my distaste for adult films on how they affect my connection to other men or my preference for active entertainment. To be completely honest, I find them a little degrading, too.

That’s not me being judge-y or politically correct. I find it degrading to me, not to the actors involved. How could I possibly measure up–literally?

But still, how can I possibly measure up, even in my own mind, to guys who are paid to look amazing while having sex? I’m neurotic enough about my physical appeal and my sexual prowess. I don’t need hot males on my screen adding to the insecurity and feelings of inadequacy that I already carry from bed to bed.

See, I told you I was neurotic.

Several years ago, I put my neuroses aside long enough to enter a “bear chest” competition at a cruise bar in Melbourne. Much to my surprise and delight, my shaved pecs won, beating out those of guys who were half my age and twice as in shape. (Go figure.)

I returned to the stage to collect my prize and make my acceptance speech. “I’d like to thank the Academy…”

Sadly, an Oscar wasn’t inside the winner’s bag. It was a stash of adult videos. I gave most of them to my friend Dov, who had cheered me on from the crowd, and kept the one called Black Studs for myself.

I never got around to watching it, and now I have no idea where it is. I’m not sure if it got lost in the shuffle as I moved around from continent to continent, or if I gave it to a Grindr date who happened to spot it lying on a table.

I don’t miss it, and I have plenty of other, better, mood enhancers, from my Spotify playlist of songs that came out the year I was born to YouTube documentaries. The last time I had sex, one on the history of New York City was playing in the background.

I couldn’t have been more turned on, not even if everyone in the naked city had been doing it, too.