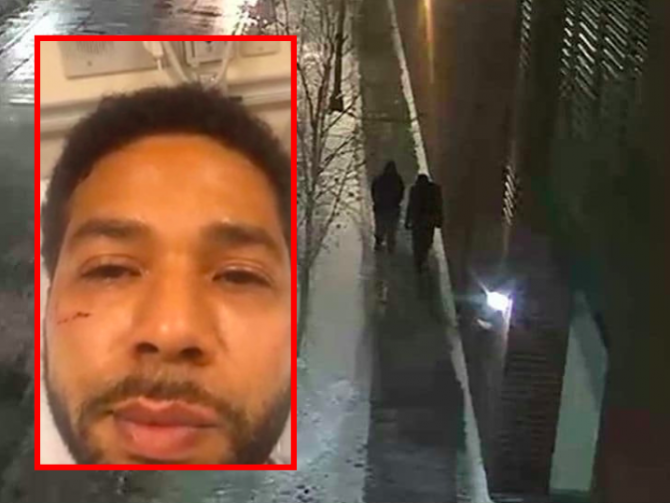 Chilling new details have emerged in the horrific attack against Jussie Smollett that happened earlier this week.

In the very early hours Tuesday morning, Smollett was reportedly approached by two white men wearing ski masks who shouted, “Aren’t you that f*ggot ‘Empire’ n*gger?” They men then pounced on him, broke his rib, slid a noose around his neck, doused him in bleach, and screamed “This is MAGA country!” then fled the scene.

Smollett was taken to a local hospital, where he was treated for his injuries and released a few hours later. Meanwhile, the two alleged assailants remain at large.

Related: Of course conservatives are calling Jussie Smollett a liar and his attempted lynching #fakenews

Now, Chicago police released two surveillance photos of two figures they are calling “persons of interest” in the attack.

Hours ago #ChicagoPolice detectives located a surveillance camera that shows potential persons of interest wanted for questioning in reference to the assault & battery of Empire actor. A community alert w/ photos is being constructed and will be disseminated shortly….Photos of people of interest who were in area of the alleged assault & battery of Empire cast member. While video does not capture an encounter, detectives are taking this development seriously & wish to question individuals as more cameras are being reviewed.

Photos of people of interest who were in area of the alleged assault & battery of Empire cast member. While video does not capture an encounter, detectives are taking this development seriously & wish to question individuals as more cameras are being reviewed pic.twitter.com/xJDDygtocr

Meanwhile, TMZ spoke with a woman who lives in Smollett’s apartment building who claims she saw a suspicious man milling around just an hour and a half before the attack.

The woman — who asked us not to use her name — tells TMZ, she walked out of the building at 12:30 AM Tuesday to take her dogs out and saw the man near the door, pacing between the parking garage and entrance, looking agitated and smoking a cigarette. She says, “He looked out of place.”

She described the man as “a white man with scruff on his face” and said he was dressed in  “a blue winter beanie, a blue zip-up sweatshirt with a hood and blue jeans that were too short.”

She says she noticed what looked like a rope, or a clothesline, protruding from the bottom of his sweatshirt, made of white and blue material. She says he was staring at another man about 300 feet away, who was standing near another entrance to the building. She says she got “creeped out” by the man, and after 5 minutes she retreated back into the building.

Police say they have reviewed several CCTV videos in the area, but have not yet found any footage of the attack.