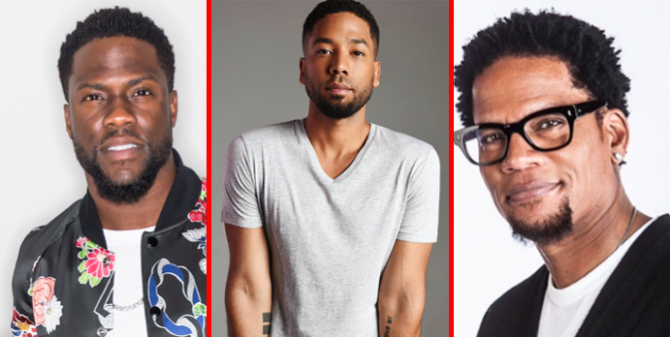 Yesterday, Jussie Smollett was attacked by two white men wearing ski masks who shouted, “Aren’t you that f*ggot ‘Empire’ n*gger?” before pouncing on him, breaking his rib, sliding a noose around his neck, dousing him in bleach, and fleeing the scene.

Smollett was taken to a local hospital where he was treated for his injuries. The Chicago Police Department is now investigating the incident as a “possible hate crime.”

The response to the attack has been a mix of shock, sadness, heartbreak, and outrage, with a number of celebrities, activists, and other public figures speaking out in support of Smollett, who has since been released from this hospital.

Related: Twitter responds to the attempted lynching of Jussie Smollett

Among the calls for love and tolerance was none other than… Kevin Hart?

“This is unbelievably sad,” he wrote. “Why are we going backwards….this is disgusting. We as people have to do better. WTF is going on the world????”

He continued: “Why are we falling in love with hate???? God damn it people….Choose love…I repeat…Choose love. I will forever choose love and I will continue to teach my kids how to do the same. Stand strong brother”

Sending prayers your way @jussiesmollett ….This is unbelievably sad. Why are we going backwards….this is disgusting. We as people have to do better. WTF is going on the world???? Why are we falling in love with hate???? God damn it people….Choose love…I repeat…Choose love. I will forever choose love and I will continue to teach my kids how to do the same. Stand strong brother

Here are just some of the responses…

You should have just sat there and ate your food, Kevin. Ain’t nobody trying to watch you use this for an op.

But keep joking about beating up your kid for being gay, Kevin Hart!

Where’s Kevin Hart and DL Hughley with some more of their little homophobic jokes? Since it’s all just funny and accountability isn’t important.

Do you see why the “jokes” weren’t funny now??

Given what we’ve seen so far, I fully expect the men who attacked Jussie Smollett to score a sit-down interview with Ellen at some point in the next few weeks. Maybe it will be a roundtable discussion with Kevin Hart.

Reading all these comments are giving me LIIIIFFFFEEEEE

At least D.L. Hughley, who was one of Kevin Hart’s loudest supporters during his whole homophobic joke scandal, had the good sense not to comment on the Smollett story.

I’m surprised you don’t think he’s too strong to get assaulted… pic.twitter.com/OyqDezTJrt

This is why it’s never funny to joke 5 or 10 years ago or day ago about beating your son if you find out he’s gay!

Love you DL, but please tell me the gay jokes are a thing of the past. We all have to do better.

Related: Terry Crews blasts D.L. Hughley for saying he “wanted it” when he was sexually assaulted by another man

Subscribe to Queerty for a daily dose of #life #d.l.hughley #homophobia stories and more