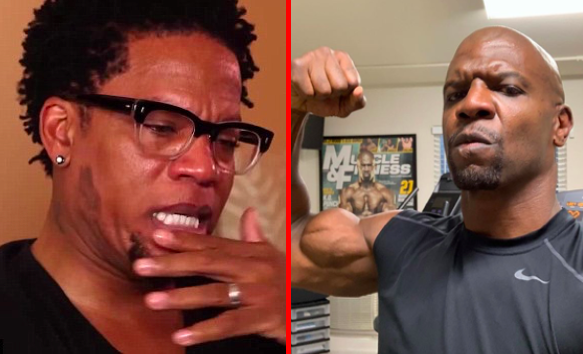 Washed up comedian D.L. Hughley and LGBTQ ally/actor Terry Crews got into a heated Twitter altercation over the weekend over an interview Hughley gave where he suggested Crews was asking for it when he was sexually assaulted by another man at a Hollywood party years ago.

A little backstory: In 2017, Crews opened up to GMA about the time he was sexual assaulted by Adam Venit, the head of William Morris Endeavor’s motion picture group and agent to many major Hollywood A-listers.

“I stick my hand out and he literally takes his hand and puts it, and squeezes my genitals. And I jump back like, ‘Hey, hey!’ … I go, ‘Dude, what are you doing? And then he comes back again and he just won’t stop. And then I really got forceful, pushed him back. He bumps into all the other partygoers and he starts giggling and laughing. I have never felt more emasculated, more objectified. I was horrified. I went over to Adam [Sandler] right then and there and said, ‘Man, come get your boy. What is his problem?’”

This past weekend, a VLAD TV interview surfaced online in which Hughley, who was one of Kevin Hart’s most vocal supporters during the homophobic scandal that cost him his Academy Awards gig, was questioned about what happened to Crews.

“I think it’s hard for me to think that a dude with all those muscles can’t tell an agent to not touch his ass,” the 55-year-old comedian opined.

He continued, “I don’t understand. I think that now everybody’s so into this notion that, ‘It happened to me too.’ Hey, motherf*cker, God gave you muscles so you could say no and mean it.”

The interview was recorded back in August, but Crews apparently hadn’t seen it until now, because on Sunday, he tweeted the video at Hughley, along with the caption: “‘You told the world “God Gave Me Muscles So I Could Say No…” Are you implying I “wanted” to be sexually assaulted? I’m listening, sir…’”

Are you implying I “wanted” to be sexually assaulted?

You saw the video!

That’s when Crews replied: ‘Sir you said I should have pushed him back, or restrained him and I DID ALL THOSE THINGS… but you act like I didn’t. Were you there?’

To which Hughley replied: ‘That’s different than slapping the shit outa him’

Crews finished with the perfect clap back:

Should I slap the shit out of you? https://t.co/GmePqluEIX

Later, Crew issued a lengthy tweet to criticizing the celebrities, particularly black men, who he feels laughed off his #metoo story, writing:

I have looked up to you my whole career as one of the funniest most talented people I’ve ever seen. I remember when I saw you warming up the crowd at FRESH PRINCE OF BEL AIR and I thought “this man is a genius.” But now you are an example of when comedy turns to sarcasm and cynicism. And you find it extremely easy to get jokes at someone else expense. You mock my success, but all I ever did was support you. You @50cent @unclerush and @tariqnasheed have decided my sexual assault was hilarious, whereas there are a whole generation of black women and men who don’t think it’s funny. ABUSERS PROTECT ABUSERS but they MOCK SURVIVORS as well. When you see me, keep it moving.

Subscribe to Queerty for a daily dose of #life ##metoo #d.l.hughley stories and more