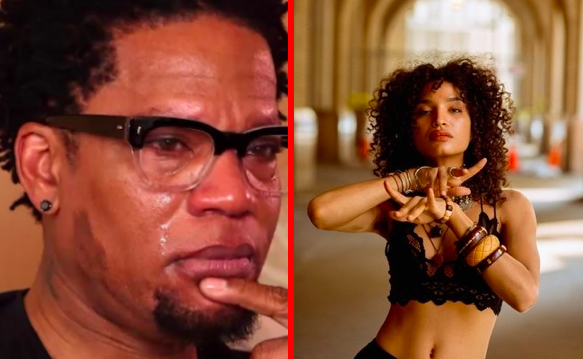 It all started when Hughley stood up for Hart on Twitter last week:

A Comedian says something that offends people and refuses to apologize? What do I say?…..Fuck em if they can’t take a joke! Well done #KevinHart #TeamDl

He followed that up with a video posted to Instagram commending Hart’s non-apology for the 40+ old homophobic tweets, which included gay jokes, AIDS jokes, and lots and lots of antigay slurs.

“So let me get this straight,” Hughley said in the video, “a comedian tells a joke that offends people and refuses to apologize, and people want to know what I think of that.”

And that’s when Moore, who is a trans woman, got involved.

After seeing Hughley’s video, she called the 55-year-old comedian out of Twitter, tweeting: “You can’t balance or evaluate the ethics of an issue you aren’t impacted by.”

White people standing up for racism in comedy. @RealDLHughley. But you can't see that because gay jokes are so popular and normalized. you can't balance or evaluate the ethics of an issue you aren't impacted by or really care brother just stop… You bias! https://t.co/2isgLxBcn9

Hughley quickly replied: “I think jokes are jokes and no one is above them nothing more nothing less … I could give less than a damn what you think if u don’t dig it don’t listen! But I’d never apologize for a joke.”

To which Moore responded: “I know you don’t care! That’s what the issue is. … Why you have to act like there ain’t other ways to make people smile…Comedy is a excruciatingly poor justification for being a biggot. No matter if it made a thousand ppl laugh. Those two people in the middle of the croud who came to laugh to and left feeling hurt matter, and yalls failure to acknowledge or see that is the issue here not your job.”

She continued: “There are consequences for the things you say no matter who it makes laugh. So since you don’t give a damn don’t act surprised & defensive when people who do give a damn oppose you … Start buying up stocks buddy cus my generation ain’t having it…your jokes divide people and that’s why you fail as a comedian. By all means don’t apologize, you can be all the clown you want but you will never lead with bullshit.”

Fail!! Lol!!!! I make a living doing what love, put kids through college, paid for my homes, and travel the world, and still don’t give a shit what a pussy like u thinks

D.L., if you’re reading up, bringing up genitals when engaged in hostile conversation with a trans person is never a winning move.

That’s when Moore said “Thank u, next” and stopped engaging, tweeting:

unpacking the subtext of 55 year old @RealDLHughley calling me, a 23 year old black trans woman with a life expectancy of 35 a pussy on twitter for standing up to him in account of his complacency of comedic bigotry and how that impacts peoples is excruciating laborsome.

She followed that up with another tweet over the weekend, writing: “P*ssy’s are warm, have depth and are strong enough to take a beating. But balls don’t do anything but hang outside and shrivel up when it gets cold. P*ssy is absolutely complimentary to who I am.”