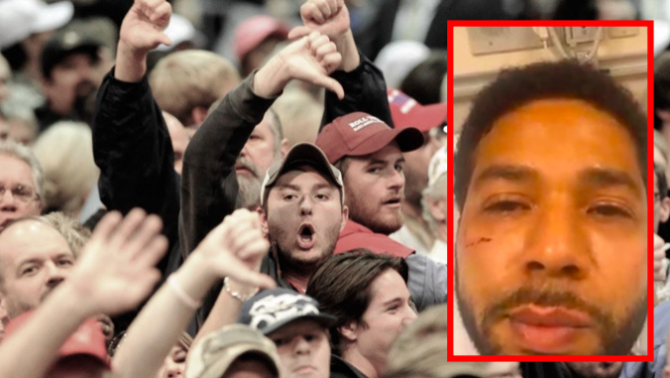 Smollett was reportedly attacked by two white men wearing ski masks who shouted, “Aren’t you that f*ggot ‘Empire’ n*gger?” before pouncing on him, breaking his rib, sliding a noose around his neck, dousing him in bleach, and screaming “This is MAGA country!” then fleeing the scene.

The “conflicting version of the incident” he is referring to is the fact that Smollett didn’t mention the fact that the attackers shouted “This is MAGA country!” until his second police interview.

Naturally, Poole suggests, this means the whole thing must be a lie. It couldn’t possibly be that Smollett didn’t mention the MAGA remarks in his first police interview because, oh, I dunno, he had just been attacked, was in shock, and was still processing what happened.

Poole also says police haven’t found any video of the alleged assailants, which must also mean the whole thing is a fabrication, because, as everyone knows… PICS OR IT DIDN’T HAPPEN! And he notes that a screenshot of Smollett in the hospital was posted online by Empire creator Lee Danels but has since been removed, which is also apparently suspect.

Meanwhile, over a Breitbart, Joel B. Pollak points a finger at the NAACP for “blaming President Trump” for the “alleged racist attack” and then goes out of his way to note that Smollett “drove himself to a nearby hospital.” The implication being that, since he wasn’t taken in an ambulance, his injuries must not have been that bad.

Then there’s Cristina Laila over at The Gateway Pundit who notes that it’s “freezing” in Chicago then pose the questions: “Why on earth would two white Trump supporters be hanging around in subfreezing temps with rope and bleach and just happen to run into a celebrity and recognize him at 2 AM in the streets of Chicago?”

Oh, let’s not forget about the trolls on Twitter…

Whoever loosely knitted the Jussie Smollett story forgot to tie a knot. His story is quickly unraveling. He said it happened right outside a Subway. Now he can’t remember where exactly it happened? Move over Nathan Phillips. A new liar needs a seat.

A brutal attack & he only has a scratch! Nothing captured on surveillance? Not even him anywhere on surveillance? Something doesn’t sound right? No witnesses either? So just exactly where was he attacked then? In some dark corner?

This is going to be unpopular opinion but fuck it. This whole Jussie Smollett situation seems odd. I’m not saying he wasn’t attacked, I’m just not sure I believe the media’s version of events. Racism definitely still exists in America, but unfortunately, so do liars.

@vwoodhull938 it is a manufactured LIE!

Jussie Smollett is an actor! He is a LIAR! https://t.co/AewWmli5sI

I will not be the least bit surprised when we find out Jussie Smollett made this whole story up. BLACK PEOPLE love to play victim any chance they get. Time will tell the truth I guarantee it. The story does not make sense, and the noose part is laughable. LIARS!#JusticeForJussie pic.twitter.com/xBInCg5dPt

This is all very rich coming from the same crowd that believed without a shadow of the a doubt the great Pizzagate conspiracy theory of 2016 that claimed Hillary Clinton and other high-ranking Democrats were running a child sex trafficking ring outside of a Washington, D.C. pizza shop.