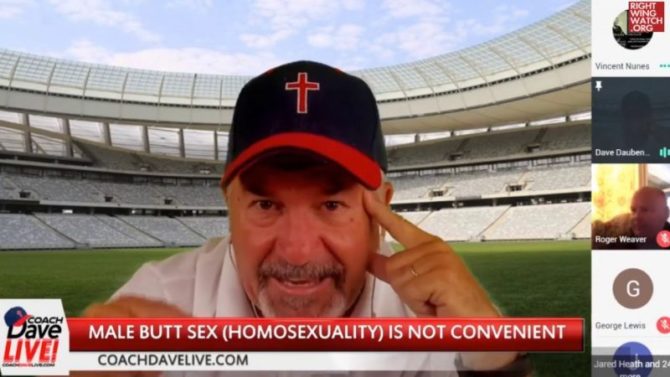 Christian extremist Dave Daubenmire returned to his “Pass The Salt Live” webcast this week to talk about “butt sex.” Specially, “male butt sex”, which he claims is “not convenient.”

Hmmm. For someone so opposed to gay sex, he sure seems to know a lot about it.

Daubenmire then goes on to compare it to going to the bathroom at Wendy’s before ordering a hamburger:

When you walk into Wendy’s and you go to the bathroom before you get your hamburger, there is a sign that says, “All employees must wash their hands before returning to work.” Why is that? Because it is dirty down there!

Daubenmire concludes his rant by saying that male butt sex is “eating our young children” and that he wants to lead the charge against it.

“I’m going to be on the forefront of re-stigmatizing what it is that they do,” he says, “and if you don’t like it, go watch something else!”