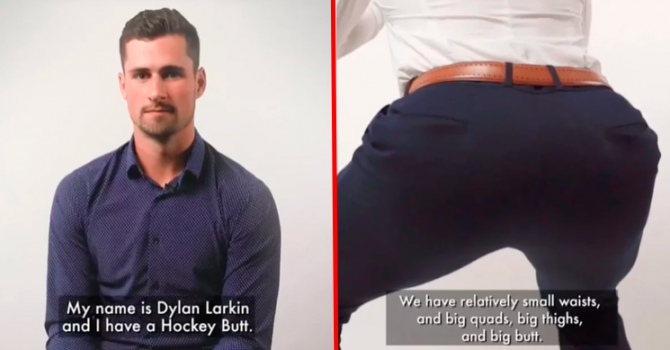 Everyone’s been talking about Detroit Red Wings Center Dylan Larkin’s thicc booty this week after he appeared in an online ad for the men’s clothing company State & Liberty, where he talked for an entire minute about the downsides of having a huge ass, er, “hockey butt.”

Now, the company behind the ad says it really wasn’t anticipating the thirsty response it has received. But anyone who’s seen the 60-second advert (which, at this point, is pretty much every gay man on the planet) probably finds that claim to be somewhat hard to believe.

With the NHL season starting up tomorrow, we wanted to bring in a specialist to help shed light on a topic a lot of people are not comfortable talking about – The Hockey Butt. pic.twitter.com/egGPXduu8N

Madi Lewis, CMO at State & Liberty, tells NewNowNext that the company has seen a spike in sales since the ad went viral. This, of course, is great, since that’s kinda sorta the whole point of making an ad.

“Our objective was to get our main message across: Our clothes are made for athletes with the purpose of being super comfortable and stretchy, while also looking professional,” Lewis explains. “Then we added a little humor in there!”

But, Lewis claims, they didn’t intend for it to be such a huge hit with gay men.

“Obviously we wanted to target athletes and hockey players, but accidentally targeted the gay community, as well,” she says.

As for 23-year-old Larkin, who’s butt is now and will forever be an internet sensation, the company’s founder Lee Moffie says he’s been “a really great sport about it.”

“[The ad] definitely [sexualized hockey players] a little bit, and by a little bit I mean a lot,” McGillis admits, though he maintains it was all in good fun. “I can appreciate that because typically there is no personality in the sport, and look at the reaction!”

“Dylan Larkin, who is not a household name in Canada, is the talk of—at the very least—gay men, and I would assume more than that.”

He’s certainly right about that…

Tries to search Dylan Larkin on twitter to find injury updates and instead just sees a bunch of memes about his butt?

i’ve been in the hospital all day (everyone is fine, roommate needed to get her appendix yeeted) so i need desperately for someone to tell me if the dylan larkin ass video is real or if i’m hallucinating from dehydration

No, you live in a society.

I’m so pleased that Dylan Larkin is becoming a gay icon. It’s what I’ve always wanted for him.

Related: NHL star Dylan Larkin opens up about the struggles of having a round, plump, muscular butt