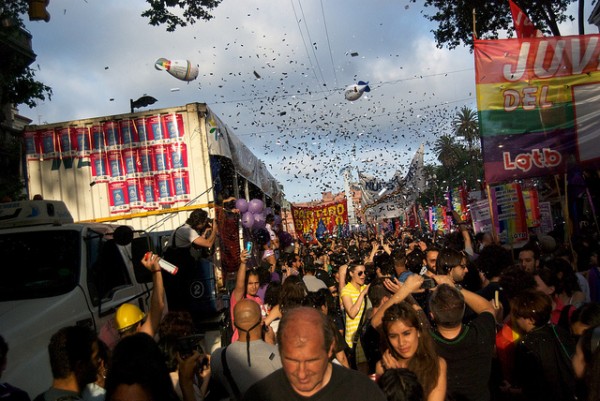 The festivities at Buenos Aires Pride were marred by an outburst of violence when three men — one carrying a hockey stick — viciously attacked an attendee. But they learned the hard way that you shouldn’t pick a fight at a Pride parade where hundreds of thousands of LGBTQ folks and allies have you surrounded.

Still, the situation was grave. Pridegoer Juan Victor González, 33, was marching down Montevideo Street on November 18th when the three men targeted and attacked him. He took multiple hits from the swinging hockey stick and was left unconscious and bloodied.

“A guy came up and beat him,” said Diego L, a witness and photographer. “As soon as they saw me taking pictures, they tried to go after me.”

But as the three men quickly learned, they were severely outnumbered.

Soon there was a crowd of 30 people hovering around the scene, yelling at them and taking photographs to help identify them later.

According to one account reported by GayStarNews, a man in head-to-toe leather approached the attacker with the hockey stick and broke it into pieces.

Police arrested one of the men, 24, but his identity has not been made public.

González awoke in a hospital bed with a concussion and seven stitches for the serious cut on his head.

Buenos Aires has seen a spike in antigay activity.

Last year, 58 assaults targeting LGBTQ people were reported, as well as 72 rights violations. Those figures are more than double the previous year.