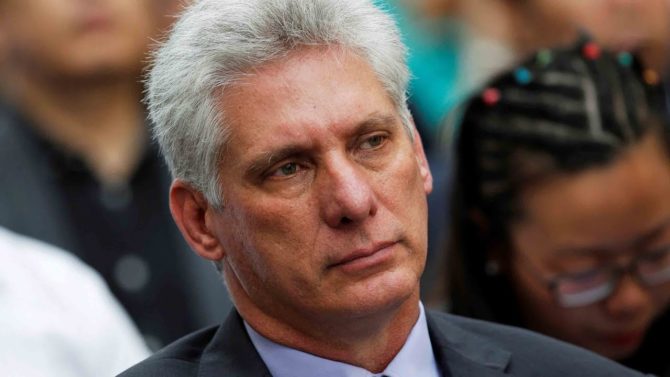 Get the cigars ready…

Cuba continued its push out of its era of Soviet, totalitarian rule this week when President Miguel Diaz-Canel stunned the world by endorsing marriage equality.

Diaz-Canal became the first President of Cuba to not have the name “Castro” since the communist revolution of 1959. Following the collapse of the Soviet Union in the 1990s, and dictator Fidel Castro‘s subsequent resignation in 2008, Cuba has undergone a modernization process, which has included opening its borders and allowing citizens a higher degree of personal freedom.

In a televised interview, President Diaz-Canal declared that he endorsed marriage between two consenting adults regardless of gender to help eliminate “any type of discrimination in society.”

The endorsement comes at a pivotal time for Cuba, as the nation has undertaken constitutional revisions to allow for more contemporary social values, and to better orient its citizens with the rest of the first world. The current draft of the updated constitution includes a provision of “the principle of non-discrimination based on sexual orientation and gender identity.”

Cuba has a long history of discrimination against LGBTQ people, particularly under the Castro regime. In a 2010 interview, former President Fidel Castro mentioned his persecution of queer people as one of his biggest mistakes. The normalization of the community began in 1979 when Castro eliminated laws prohibiting gay sex. Public perception of LGBTQ people has changed dramatically in part thanks to a campaign by Mariela Castro, Fidel’s niece, to better educate Cubans about the biology and sociology of the community. Beginning in 2008, the Cuban Health Service began providing gender confirmation treatment to transgender Cubans free of charge.

Though the United States and Cuba have a long history of political and diplomatic tension, President Obama lifted the long-standing ban on travel and trade to Cuba in 2014.