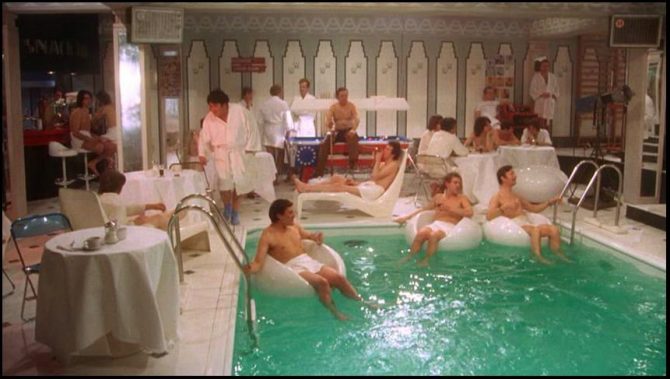 The Steamy: The Ritz

We still mourn the loss of Terrence McNally, the great queer playwright who gave us Love! Valor! Compassion!, Ragtime and Kiss of the Spider Woman: The Musical. Unfortunately, though he penned dozens of acclaimed stage shows, only a handful have ever made it before the cameras.

With that in mind, today we suggest one of his film adaptations that mixes farce with gayness. The Ritz takes loose inspiration from the Continental Baths, the New York gay steam-o-Rama that helped performers like Bette Midler launch their careers. In this fictionalized version, the great Rita Moreno plays an aspiring singer named Googie with her sights set on Broadway glory. When a mobster (Jack Weston) decides to hide out in the baths, Googie and her fan club of wacky queers give him an experience he won’t forget anytime soon. Oscar-winner F. Murray Abraham, Treat Williams, Kaye Ballard and the late Jerry Stiller also star.

Abraham, Weston, Stiller and Moreno all reprise their performances from the original Broadway production, for which Moreno picked up a Tony Award. This kind of screwball farce is notoriously difficult to pull off on film (see also: movie versions of Noises Off and Beyond Therapy), but the game efforts of the cast and McNally’s sensitive writing make this one work at times it shouldn’t. Moreover, it offers a glimpse into the mythic world of gay bathhouse culture in the 1970s–something an increasingly few of us got to experience. Moreno also gives one of her best performances as the manic Googie, which makes this bygone bust-up fun enough for us.