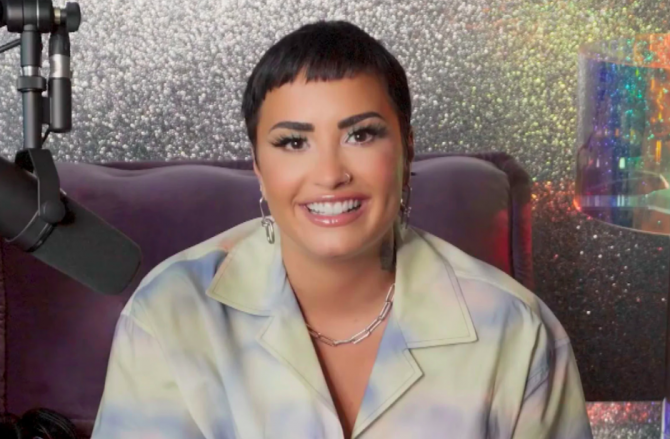 Demi Lovato is speaking up for extraterrestrials everywhere.

While promoting their new Peacock docuseries “Unidentified with Demi Lovato”, the non-binary singer/activist/UFO enthusiast explained why they take issue with people calling beings from other planets “aliens.”

“I think that we have to stop calling them aliens because aliens is a derogatory term for anything,” Lovato said. “That’s why I like to call them E.T.s.”

And, no, they were not kidding.

Related: Demi Lovato says they may identify as trans some day

To be clear, many people consider the word “alien,” when used in reference to immigrants or those traveling from other countries, to be dehumanizing and offensive; however, most people don’t find the term problematic when talking about hypothetical extraterrestrials.

Except, evidently, for Lovato, who says they have been a “believer” in UFOs their “whole life.” To them, “aliens” is a derogatory term because the E.T.s haven’t done anything to cause Earthlings any harm. Or something.

“If there are civilizations that are of consciousness in other dimensions, which has given them the technology to be able to travel through space, I think that they are looking for nothing but peaceful encounters and interactions because like I said, if they wanted us gone, we would have been gone a long time ago! I really think that if there was anything out there that would want to do that to us, it would have happened by now.”

Related: Twitter has a LOT to say about Demi Lovato’s comments on possibly identifying as trans in the future

Lovato added, “I think that the world is becoming a more open place. Slowly, but surely, I think that we’re making progress. And we’re slowly getting there. But, you know, any progress is progress!”

Let’s see what Twitter has to say about all this, shall we?

Did Demi Lovato really said that 'alien' is an offensive term when referring to extraterrestrials?! pic.twitter.com/TlTEwrzHtd

did demi lovato really just say aliens is a derogatory term?? bruh what

I am legally classified as an “Alien of Extra-Ordinary Ability” on all of my US paperwork and I just think it’s fucked up that Demi Lovato hasn’t spoken up about my visa status yet.

Society if Demi Lovato was abducted by aliens pic.twitter.com/LZ0Gbo3yU6

I’ve always found Demi Lovato annoying but now they are doing a ufo show and my eyes can’t roll back far enough.

Me overhearing Demi Lovato saying, 'We have to stop referring to aliens as aliens because alien is a derogatory term.' pic.twitter.com/ky0AQ4Y5Rr

why is Demi Lovato making a UFO documentary

aliens coming aliens seeing
to earth that demi lovato
is their activist pic.twitter.com/t9m1fXq5Tu

Not Demi Lovato as a UFO reality tv host ????

Aliens, who don’t exist or at least we don’t have a concrete proof they do, seeing Demi Lovato advocating their rights on planet earth pic.twitter.com/gkUZEdSqGk