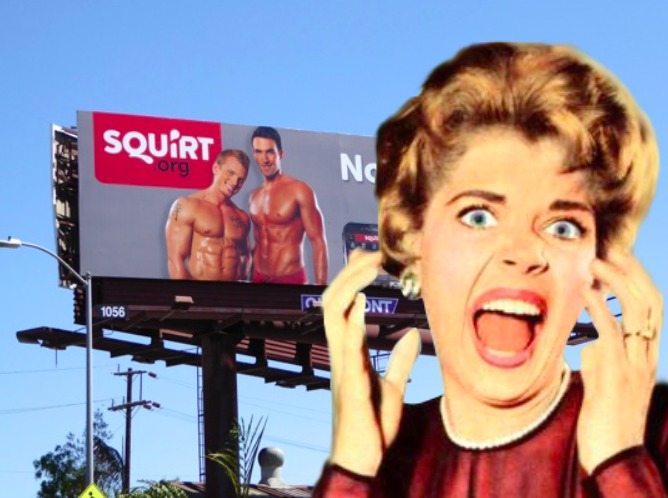 Residents in Detroit are completely unnerved over a billboard for a gay dating site that has appeared seemingly overnight along their interstate.

It features an advertisement for a website called squirt.org along with the caption “Too hot for the app store,” and two men embracing each other. The website lets registered users search their local area for locations to hookup with other “gay or bi men.” Members can also review the locations, which include public gym locker rooms and shopping mall bathrooms, with star ratings.

Related: Notice anything eye-raising about this “Grace and Frankie” billboard?

Resident Roland Robertson told the station he was “stunned” when he first glimpsed the billboard.

“It should be (taken down),” he said. “The way society is going now, you know, they putting everything out there.”

Another resident, Mark Kolaj, agreed. He told the station the billboard was not appropriate for the neighborhood or for life, in general.

“There’s a few churches around here and a few schools,” he said. “This sends bad messages to the people, man, you know, like young kids right now and the way the times are, they need more help than ever.”

He added: “Images like this is not a good direction setter, you know. I’m, like, old school mentality, you know, I’m Catholic so I believe in the bible and I believe that that is, like, one of the worst. Oh, man.”

Related: Pizzeria has perfecto response to homophobic billboard next door