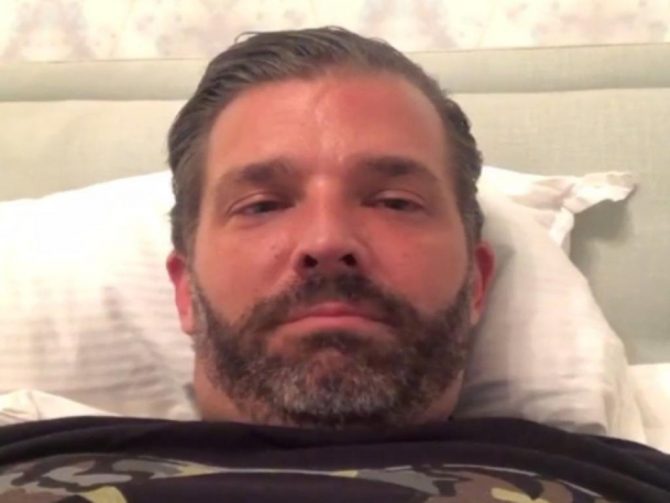 During a speech at a far-right, pro-Trump superspreader event in West Palm Beach, Florida over the weekend, Donald Trump Jr. spent roughly half an hour whining about how nobody likes him.

It all started with a story about his recent trip to Alaska, where he spent a week doing “some toxic masculine stuff” and didn’t have WiFi, so he couldn’t post anything to social media.

“It doesn’t matter, Instagram’s been screwing me so badly anyway,” he told the crowd at Turning Point USA’s sixth annual Student Action Summit.

Then he went off on a tangent about how his Instagram posts don’t get nearly as many likes as they used to.

Related: Pro-Trump student group planning massive superspreader event in Florida because of course it is

Then he claimed (without evidence, of course) that his posts used to get as many as 100 million likes every single week.

“I actually have engagement that’s almost, like, 100 million a week, and I’m losing 2,000 followers a day,” he claimed. “Think about that. It means that only those who want to actually follow me are remotely seeing my stuff.”

But it’s not just Instagram where Don Jr. seems to be having issues. He also claims Twitter is out to get him.

Back in October, he accused the social media platform of limiting the reach of his posts, tweeting: “Twitter has been throttling my reach and I’m getting 1/3 the amount of RTs I would normally get. Instagram is doing the same & worse for the last few days.”

Twitter has been throttling my reach and I’m getting 1/3 the amount of RTs I would normally get. Instagram is doing the same & worse for the last few days.

I guess they don’t want the truth about the Biden crime family out there and they will cover for them at all costs.

Several of Junior’s tweets have been flagged in recent weeks for making false claims and spreading misinformation about November’s election.

“No one is fighting for the truth,” he told the crowd at Turning Point USA’s conference. “The media are cheerleaders for the left.”

Related: “Many people” believe Don Jr. was high out of his mind in cellphone video taken inside budget motel