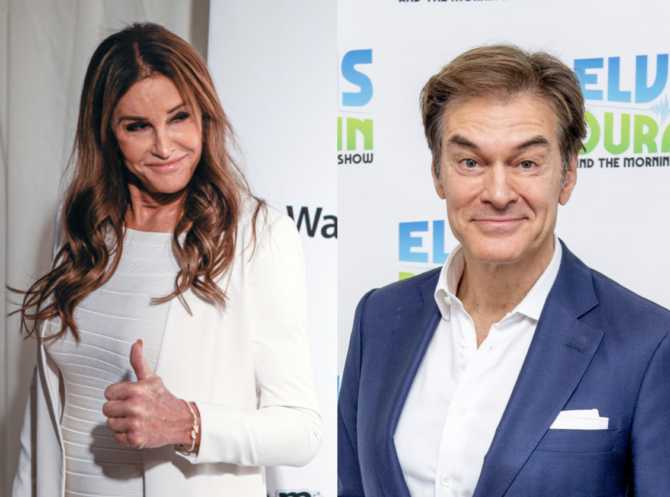 When it comes to TV personalities pivoting from the small screen to politics, there are two categories: the Donald Trumps and the Caitlyn Jenners. It is becoming increasingly clear that Dr. Mehmet Oz, who is currently running in the GOP primary for U.S. Senate in Pennsylvania, belongs in the latter category.

Despite huge name recognition, deep pockets, connections to Oprah, and a ton of press coverage, the TV doctor is running an absolutely terrible campaign, and he has nobody to blame but himself.

Today, Oz, who moved from New Jersey to Pennsylvania for the sole purpose of running for office there, will take a break from campaigning to fly across the country to Los Angeles, where he will receive a star on the Hollywood Walk of Fame, according to Newsweek. Why he thought this was a good idea is anyone’s guess.

Caitlyn Jenner pulled a similar move during her disastrous gubernatorial run in California last summer, when she flew to Australia to film Big Brother VIP, and was widely criticized. She ultimately lost the election, winning a paltry 1% of the vote. (She also reportedly burned through almost $1 million on the failed vanity project.)

Related: Caitlyn Jenner’s campaign debrief has begun and OMFG what a mess that was

Oz’s opponents were quick to criticize him for leaving to campaign trail to receive a star on the Hollywood Walk of Fame.

A new attack ad accusing the TV doctor of being “right for Hollywood, but he’s wrong for Pennsylvania” has already begun airing across Pennsylvania. This is in addition to another attack ad branding him a “Hollywood liberal” that hit airwaves last month.

The ads come after Oz’s abysmal performances in multiple straw polls. In one of them, he received just one–yes, ONE–vote out of more than 100 cast, despite spending over $5 million on TV ads. In two others, he placed third and fourth.

The straw poll results in the Senate race are not binding, and they’re not surveys of the actual electorate. Many political operatives expect that the state Republican Party ultimately will decline to endorse in the primary this year — giving state committee members much less power than they would otherwise have. But the fact that Oz has stumbled out of the gate in this first test among GOP activists has exposed vulnerabilities in his past record and raised questions about whether rank-and-file voters will also turn their backs on him once they learn more about him.

Tellingly, Oz has made absolutely no mention on his Twitter page about receiving a star on the Hollywood Walk of Fame today. This morning, while he was presumably en route to L.A., he tweeted a video of himself meeting with constituents in Luzerne County.

“I spent time with West Pittson leaders in Luzerne County talking about how regulations and bureaucracy are holding back our communities from making needed investments,” the 10-time Daytime Emmy Award winner wrote.

I spent time with West Pittson leaders in Luzerne County talking about how regulations and bureaucracy are holding back our communities from making needed investments. pic.twitter.com/GRHnXO1U1R

From tv personality to expert on how regulations and bureaucracy are holding back our communities.

No, just someone who thinks they know more.

What is “it” exactly? You never really say anything but you talk too much. GET OUT OF PA! We don’t want or need you. Hypocritical fraud.

“Our communities”? You’re from New Jersey you quack.

The Hollywood Walk of Fame ceremony honoring Oz will commence at 11:30 AM PST today.

Subscribe to Queerty for a daily dose of #politics #caitlynjenner #dr.oz stories and more