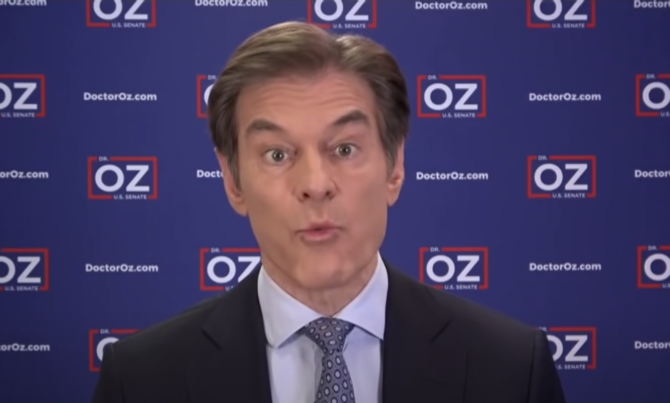 Politico reports that the TV doctor, who lives in New Jersey but is running for U.S. Senate in Pennsylvania, has reached “code-red crisis” mode just two months after announcing his candidacy and with several more months to go until the Pennsylvania Republican Primary.

In a recent GOP straw poll, Oz received just one–yes, ONE–vote out of more than 100 cast, despite spending $5.4 million on TV ads. In two other straw polls, he placed third in one and fourth in the other.

The straw poll results in the Senate race are not binding, and they’re not surveys of the actual electorate. Many political operatives expect that the state Republican Party ultimately will decline to endorse in the primary this year — giving state committee members much less power than they would otherwise have. But the fact that Oz has stumbled out of the gate in this first test among GOP activists has exposed vulnerabilities in his past record and raised questions about whether rank-and-file voters will also turn their backs on him once they learn more about him.

Oz’s poor showing in the straw polls has also given Donald Trump pause, a Trump insider says. According to the insider, the ex-president, who everyone knows doesn’t like to be associated with losers, was “taken aback” by the results and “expected him to do better because of the celebrity.”

Related: Dr. Oz’s Senate campaign is an even bigger trainwreck than we were expecting

Oz has also become the target of several Republican super PACs that have begun running attack ads against him, branding him a “Hollywood liberal” and blasting him for previously supporting the Affordable Care Act and abortion rights.

All this comes after Oz, who is supposed to be a cardiologist, was widely ridiculed by doctors and nurses on social media after he tweeted a video of himself performing a blood pressure check on a man at the Pennsylvania Farm Show but did the check completely wrong.

Where to begin with this bad technique?
• Wrong-sized cuff.
• Cuff over clothing.
• Patient talking.
• Feet not flat.
• No mask.
• Cuff is likely upside-down.

It’s important to hear the issues causing one to obtain an inaccurate blood pressure reading.

The blood pressure video was posted shortly after Oz and his wife, Lisa, were caught cursing out a reporter without realizing she was still on the phone.

Lisa failed to hang up on Olivia Nuzzi, who was covering Oz’s campaign for New York Magazine, and instead connected the phone to her car speaker, where she and her husband proceeded to call her a “liar” and a “f*cking girl reporter”.

I spent the last 3 weeks reporting on Dr. Oz for @NYMag. Things got strange quickly. https://t.co/aa2k8A1raM

The Pennsylvania Republican Primary will likely happen sometime in May.