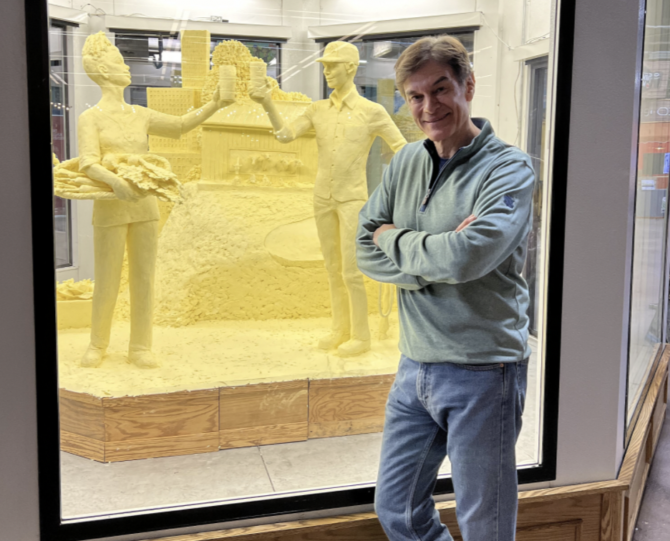 TV personality/GOP candidate for U.S. Senate Dr. Mehmet Oz appears to be doing the impossible. He’s running a political campaign even worse than the one Caitlyn Jenner ran last year when she barely got 1% of the vote in her bid to unseat California Gov. Gavin Newsom.

Since announcing his candidacy back in November, Oz, who lives in New Jersey but is running for U.S. Senate in Pennsylvania, has been making appearances at local diners and farm shows, where he’s been posing for lots of maskless photo opps with likely Republican voters.

The other day, he posted a video of himself to Twitter checking a man’s blood pressure at the Pennsylvania Farm Show along with the caption, “I’m doing blood pressure checks at the PA Farm Show. It’s important to hear the issues driving up your blood pressure.”

It’s important to hear the issues driving up your blood pressure. pic.twitter.com/bxw0WjtHRG

It didn’t take long for people to notice that Oz, who is supposed to be a cardiologist, was taking the man’s blood pressure all wrong.

Not only was the cuff upside down, but it was placed over the man’s flannel shirt, the man didn’t have his feet flat on the ground, and neither of them were wearing masks while they chatted throughout the entire reading.

Where to begin with this bad technique?
• Wrong-sized cuff.
• Cuff over clothing.
• Patient talking.
• Feet not flat.
• No mask.
• Cuff is likely upside-down.

It’s important to hear the issues causing one to obtain an inaccurate blood pressure reading.

Cuff too small, his feet are not flat on floor, his back is not supported and he’s talking. This BP is as accurate as guessing jelly beans in a jar

Besides horrible positioning, the cuff was upside down

Please stop claiming that you know how to practice medicine

That cuff position was way too low.

Sitting, leaning over with a big thick flannel shirt over top is not the way we take BP’s

Ps … the automatic cuff on someone that heavy ain’t all that accurate either. 😉

But being a cardiologist u know that, right … @DrOz

The video was posted shortly after Oz and his wife, Lisa, cursed out a reporter without realizing she was still on the phone.

Lisa Oz failed to hang up on reporter Olivia Nuzzi, who was covering Oz’s campaign for New York Magazine, and instead connected the phone to her car speaker, where she and her husband proceeded to call Nuzzi a “liar” and a “f*cking girl reporter”.

I spent the last 3 weeks reporting on Dr. Oz for @NYMag. Things got strange quickly. https://t.co/aa2k8A1raM

A December poll conducted by the Trafalgar Group asked over 1,000 Republicans in Pennsylvania who they’d vote for it they could do so tomorrow. Oz led the field, taking 18.8% of the vote, a full ten points ahead of the next GOP candidate.

The numbers are a lot less impressive, however, when you factor in that the vast, vast, vast majority of respondents (50.8%) said they hadn’t yet made up their minds, and another 10.8% said they would pick “another candidate” not listed.

Subscribe to Queerty for a daily dose of #politics #caitlynjenner #dr.oz stories and more