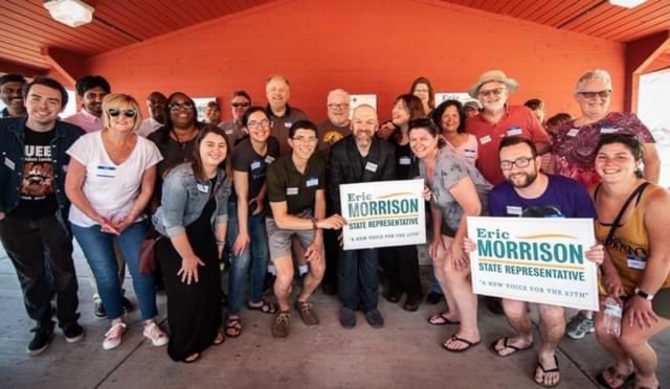 Meet Eric Morrison, the Democratic nominee to the 27th District in Delaware’s House of Representatives. Morrison just won a landslide victory over his rival, incumbent Rep. Earl Jacques, who had publicly shamed Morrison for dressing in drag.

Newsweek reports Morrison took home a whopping 61% of the vote in the Tuesday (9/15) primary after enduring a mudslinging campaign. Morrison is an openly gay man, and Jacques had attacked his history of performing in drag shows under the name Anita Mann as unbecoming of a state Representative. Morrison had also hosted drag fundraising events for his campaign.

“That is so far off-base for our district, it’s unbelievable,” Jacques said of Morrison’s performance history during the campaign. “You wonder what the point is. You can have fundraisers, I don’t care about that. But dressing in drag? Really? I’m not sure he represents the people who attend those places of religion. If he’s actually having a fundraiser in drag, I don’t think those churches would endorse that … I’m just saying it’s a little different, that’s for sure.”

After a loud public outcry–including criticism from fellow Democratic officials–Jacques apologized for his remarks, deeming them “insensitive, hurtful, and simply wrong.”

“It is wrong to attempt to pass judgment or impose one person’s belief structure onto others,” Jacques admitted. “My job as a state representative is to represent all constituents of the 27th District, regardless of gender, race, creed, orientation or identity, period.”

The apology, however, did little to alter the course of the race. Jacques’s criticism of Morrison helped make LGBTQ issues a centerpiece of the campaign. Morrison attacked his record, citing that Jacques had voted against marriage equality in 2013 and refused to support bans on conversion therapy.

“I say that no real Democrat votes against a woman’s right to choose, LGBT equality, banning the barbaric practice of LGBT ‘conversion therapy,’ environmental protections, and preserving vital programs for seniors,” Morrison said in a statement.

Apparently, his words resonated with voters. Early Wednesday morning, Morrison tweeted his thanks to his constituents and set his sights on the bigger prize this November.

“We are taking today to celebrate and rest,” Morrison said, “and tomorrow we keep it in high gear for the November 3 general election!”

Last night, we won our primary election with a spread of over 22%! Thank you to everyone who supported our campaign in any way, big or small. We are taking today to celebrate and rest—and tomorrow, we keep it in high gear for the November 3 general election! pic.twitter.com/lPTxp7QoRZ