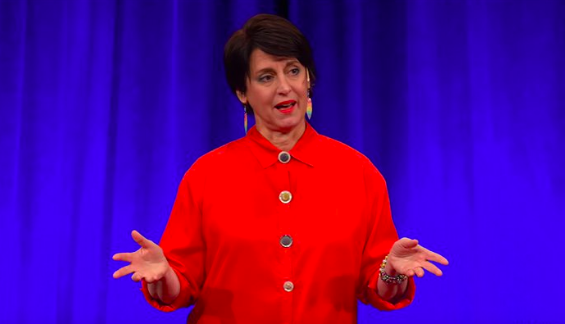 After spending 20 years as a member of an Evangelical church, Susan Cottrell was absolutely convinced that “being gay was somehow wrong.” That is, until her own daughter came out as bisexual.

In a powerful new TED talk, the mother of five says her perspective completely changed the moment her 20 year-old-daughter, Annie, called from college to say: “Mom, I’ve got something to tell you. I’m attracted to girls. I think I’m bisexual. I prayed about it, Mom. I resisted, but it won’t go away.”

Cottrell’s immediate response: “Don’t give in. We’ll support you. How can I help?”

Up until then, Cottrell regularly attended a Bible study class where she and her peers were constantly told “homosexuality is a sin and we can’t accept it.”

Now, she had a choice to make.

“I realized I was being asked to choose between the two most important parts of my life: my child and my church. I chose my child,” she recalls.

It took some time for her to fully accept Annie, but eventually Cottrell realized that “God was telling me to serve the gay community.”

So she did just that.

She and her husband, Rob, started the blog FreedHearts.org, which offers messages of love and hope to counter the hateful ones spewed by many Christian organizations and churches, like the very one she had attended for two decades.

“As pastors, Rob and I represent the voice of God, and it’s a voice of love,” she says.

Since then, the Cottrells have also facilitated support groups, officiated same-sex weddings, and offered free mom and dad hugs at Pride parades.

“Real love,” she says, “accepts people as they are with room for who they may become.”