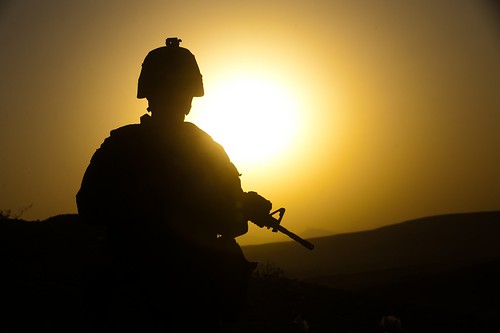 Former officer Michael Almy says he got tossed out of the Air Force for homosexuality after a fellow service member in Iraq read some of his emails on a government-issued computer. Almy wants to rejoin the military now that Don’t Ask, Don’t Tell is about to go bye-bye, so he can finish out his service and collect benefits as he originally planned. The only problem: all military branches are at full capacity because of the bad economy and the Department of Justice has no plans to reinstate discharged officers nor pay them for any lost benefits. So naturally, he’s suing.

Even after DADT becomes history of September 20th, the judicial system will still have to contend with court cases challenging the law’s constitutionality, especially when it concerns military members getting due process and benefits.

“The sad truth is repeal really does nothing for people thrown out of the military,” Almy said. “There is no restitution, no reparations, no special personnel process to help those to get back in the military who were thrown out.”…

Dan Woods, an attorney for the Log Cabin Republicans, said if the lower court ruling is upheld by the U.S. 9th Circuit Court of Appeals it could bolster the cases of thousands of former service members, like Almy, who “are still suffering the collateral consequences of being discharged under this unconstitutional law.”

“A lot of people lost opportunities for promotion, a lot people might want to re-apply but can’t because now they’re too old,” Woods said. “Those people ought to have the right to use our case to try to get their discharged status changed, or to try to get reinstated, or try to get back pay.”

Woods said the Obama administration wants his case dismissed because it does not want “to deal with some 14,000 people making claims for back pay and reinstatement. That’s really what it’s about.”

Also if the military doesn’t institute benefits for same-sex partners of LGBT service members—because the Defense of Marriage Act won’t allow them to—they can expect more queer military men and women to try and cheat the system like the three Marine corporals who faked with sham marriages to get housing allowances available only to married straight couples.