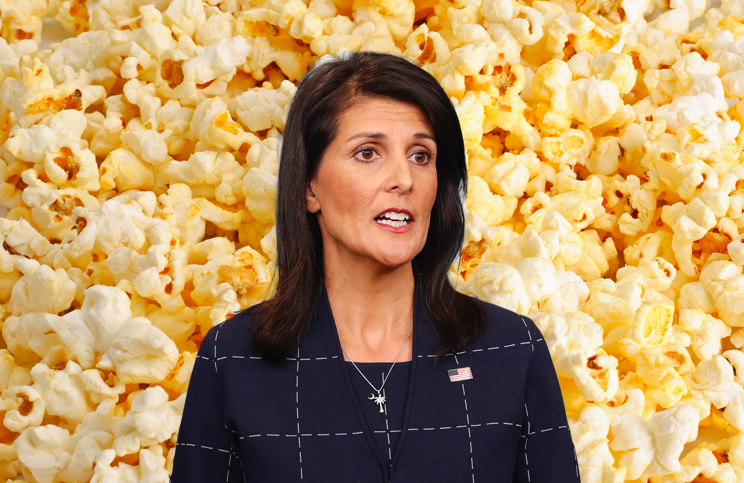 Nikki Haley would like to speak to a manager.

The Former UN ambassador found herself trending on Twitter last night after she pulled a Karen and complained about not one but two missed delivery dates on her popcorn order.

“Ok @PopcornFactory two messed up birthday orders missed delivery dates with no explanation,” the former Governor of South Carolina tweeted. “First time I gave you the benefit of the doubt. Second one tells me not to buy from you again. #DisappointedNephew”

Ok @PopcornFactory two messed up birthday orders missed delivery dates with no explanation. First time I gave you the benefit of the doubt. Second one tells me not to buy from you again. #DisappointedNephew

We’re in the middle of a global pandemic, over 160,000 Americans are dead, the economy is in shambles, the US Postal Service is under attack, Russia is once again meddling in the election, and Nikki Haley is whining about popcorn.

Thankfully, the rest of Twitter was quick to remind her of how ridiculous she was being.

Did you try to send this order via USPS? Because Nikki, there are some things you should probably read up on … https://t.co/cttrnP9qb9

Does Nikki Haley know you can but kernels at the grocery store and make the popcorn at home?

Did Nikki Haley get her popcorn yet?#PopcornVigil

I just set up a “GoFuckYourself” fund for Nikki Haley’s popcorn, if anyone is interested in donating a middle finger.

Time for a huge announcement!

Please sign and help us bring an out-of-this-world “popportunity” into reality pic.twitter.com/8D2BM9iB4Y

I stayed up all night worried about Nikki Haley’s popcorn.

Can someone — PLEASE — give me a tracking number?

Nikki Haley. Tougher on a popcorn delivery service than she is on a president whose failures have led to mass American death. https://t.co/kYLlvqppNl

They just rushed Trump out of his presser because Nikki Haley’s popcorn tin arrived. Finally.

Thankfully @NikkiHaley is using her voice on Twitter for good, like voicing her frustration about popcorn versus say the murder of Jamal Khashoggi by our “ally” https://t.co/V4Z6XnOEzj

The president just wanted to keep people from voting and not mess up @NikkiHaley’s nephews popcorn order!

I couldn’t sleep all night. Did Nikki Haley get her popcorn yet? I’m really concerned.

Then there were those who responded directly to Haley’s tweet…

I wonder if there have been any major changes at the United States Postal Service lately that have caused widespread delivery delays across the country?

Do you know anyone in government? I bet they could check for you. pic.twitter.com/Rrg2i2kape

Republicans are starting to realize delayed mail delivery might even impact themselves, too.

ma’am, please stop mucking up the #DisappointedNephew hashtag with this nonsense

Thank you for using your platform to speak on the issues that really matters. It would be silly to address all the injustices done at the hands of the Trump administration when the Popcorn Factory is out here messing up orders

Karen Haley would like to speak to Popcorn Factory’s manager.🙄 pic.twitter.com/Zb0LsiLUeP