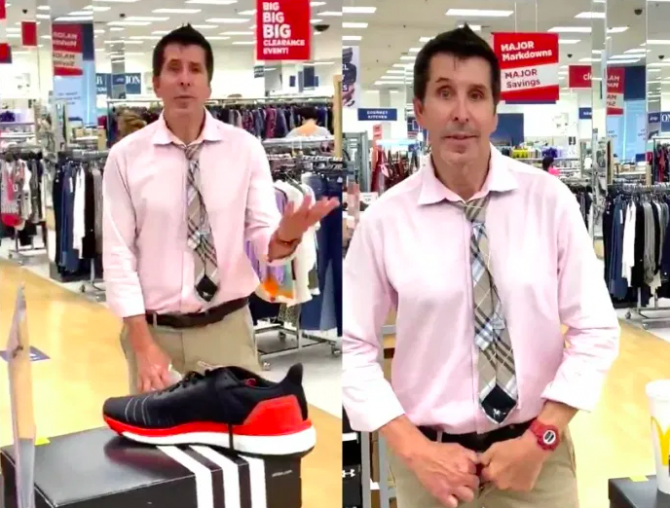 A California man had a homophobic meltdown inside a discount department store after being told he needed to wear a mask while shopping for bargain clothes and home goods.

The incident happened inside a Marshall’s store in Campbell, California earlier this week. The disheveled-looking man was later identified as Tim Gaskin, a former daytime talk show host from San Francisco.

After an employee told him he needed to mask up before entering the building, Gaskin responded by throwing a homophobic temper tantrum, shouting antigay slurs and claiming the store would have to pay a $75,000 fine for denying him entry.

Then he flashed one of those fake “Freedom to Breath Agency” cards people have been selling on the internet that says he is “face mask exempt.”

The entire thing was captured on camera by another customer and later uploaded to Twitter, where it quickly went viral.

Gaskin then tells the men to read the mask mandate issued by Gov. Gavin Newsom.

Today at Marshalls in Campbell, Ca this Kevin didn’t want to wear a mask. Hurled offensive comments to the workers, my friends, to customers while exposing gestures to the public. I’m reaching out to y’all in the ether to expose this m’fer to the world! #KarenStrikesAgain #mask pic.twitter.com/ftBkGsDqcW

Insult to injury this loser thinks he can tell the world of laws/lies while scting above it all. Lets expose this one. #blm #KarenGoneWild #KarenStrikesAgain pic.twitter.com/NWVvpwM49K

Now, here’s where the story gets especially weird.

His use of homophobic language surprised those who recognized him on social media as he was once a known figure in the San Francisco LGBTQ community. Starting in 2004, he hosted a weekly talk show called OUT Spoken for Comcast public access that addressed gay issues.  … Later he started a magazine called ‘Benefit: The Lifestyle of Giving,’ which covered philanthropy in the city. At the time when it first published in 2006, Gaskin said he was a longtime fundraiser for AIDS-related causes and he wanted to do more for charities in San Francisco.

That’s right, folks. The guy who threw a homophobic meltdown inside a Marshall’s store is, himself, a homosexual, albeit a self-loathing one, evidently.

According to his LinkdIn profile, Gaskin is no longer a daytime talk show host and now works in the meat import industry. He has yet to respond to the Marshall’s video.

Related: People are gagging over the hunky personal trainer in this Planet Fitness anti-masker Karen video