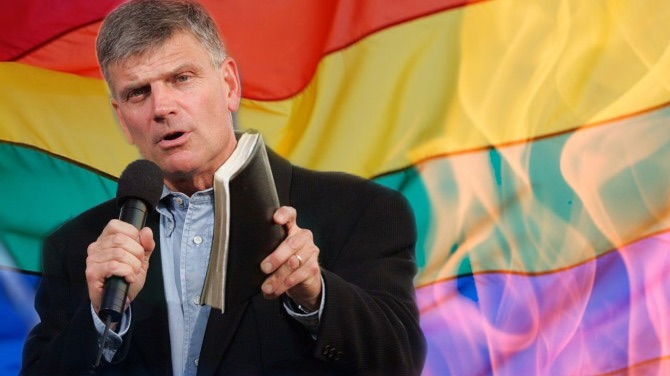 Evangelical preacher Franklin Graham’s upcoming tour of the United Kingdom faces being seriously derailed. So much so, Graham felt moved to write an open letter to LGBTQ people opposing his visit to assure them he’s not a hate preacher and claiming “My speech doesn’t hurt anybody.”

The 67-year-old, US-based pastor, son of the late Billy Graham, was due to appear at eight large towns and cities arenas around the UK later this year, kicking off in Glasgow on May, 30.

However, when news of his appearances spread, LGBTQ campaign groups began to raise their voices in protest.

As the controversy around his tour grew, the ACC Liverpool conference center was the first to cancel his appearance. It said Graham’s views were “incompatible” with the venue operator’s own.

In response, Graham took to Facebook earlier this week to publish a “letter to the LGBTQ community in the UK.”

He begins by saying, “It is said by some that I am coming to the UK to bring hateful speech to your community. This is just not true.”

Instead, he claims to be bringing only “good news” – that homosexuality is a sin, that everyone is a sinner, and we can all be forgiven by God.

“I invite everyone in the LGBTQ community to come and hear for yourselves the Gospel messages that I will be bringing from God’s Word, the Bible. You are absolutely welcome.”

The letter has not had the desired effect. Yesterday, the 13,600-capacity Sheffield Arena also canceled his appearance, due June, 6. The venue operator said it “does not endorse” Graham’s views.

Graham is known for taking every available opportunity to speak out against any advancement in LGBTQ rights.

In the past, the vocal supporter of President Donald Trump has spoken out against banning so-called conversion therapy and against same-sex marriage.

Besides the canceled dates in Liverpool and Sheffield, Graham is due to appear in Glasgow, Newcastle, Milton Keynes, Cardiff, Birmingham, before returning to the UK in October to appear in London. At least one other venue is believed to be holding discussions on whether to allow his visit to go ahead.