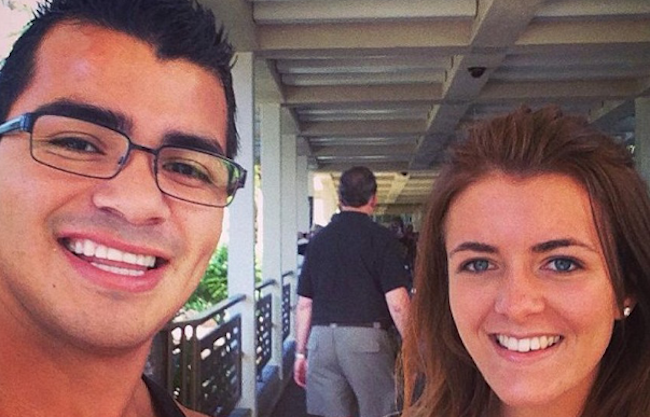 On Friday, a San Diego woman was sentenced to a year and nine months in prison for lying to the FBI about her whereabouts on the day her husband’s secret gay lover was brutally murdered and left in a ravine in Baja California.

According to prosecutors, 22-year-old Taylor Maria Langston was “within a hair’s breadth” of getting charged as a co-conspirator in Jake Merendino’s murder. But the evidence simply wasn’t there.

Evidence led investigators to believe Langston was present in Mexico in the early hours of May 2, 2015 when Merendino was murdered. Meza’s phone tracked his movement within the country and put him right at the scene of the crime, but Langston’s exact location remains unclear.

One thing is absolutely certain: Neither were at their friend Joe’s house in Tijuana, the alibi they conjured up that wound up costing the FBI 19 days in the murder investigation.

Donald Levin, Langston’s defense attorney, tried painting the picture of a woman who was manipulated and constantly lied to, claiming her relationship was both emotionally and physically abusive.

Merendino allegedly didn’t know anything about Langston or her relationship with Meza. According to testimony, Langston knew Meza spent a lot of time with Merendino, but was told his name was “George” and he was dying of cancer. Meza apparently said the expensive gifts were from an accounting job — a job that never existed.

Eventually, Merendino purchased a condo in a complex near Rosarito Beach in Mexico, believing Meza would be moving in with him. Langston, meanwhile, was pregnant.

This is when Meza began enacting a scheme that, if successful, would make him the sole beneficiary of Merendino’s $3 million estate and condo.

The exact day escrow closed on the condo, Meza lured Merendino to a highway around 2 a.m. An hour later, his body was found — throat slashed, 25 stab wounds on his torso. He’d been dragged and dumped over a small cliff.

Border cameras caught Meza and a pronouncedly pregnant Langston re-entering the U.S. that morning in different cars. Meza had changed his clothes.

According to Assistant U.S. Attorney Robert Ciaffa, Langston had much to benefit from the death. He pointed out text messages between the couple that suggested she was prepared for Merendino to die soon so they could collect their fortune.

Langston’s attorney attests she lied about their whereabouts because she was scared of Meza.

Prosecutors agreed there was little evidence to suggest domestic violence — except for an incident in 2014 when police were called to their home and Meza was convicted of battery.

“She willingly participated in a crime after knowing that my cousin had been murdered and that her husband had somehow been involved. … She and Mr. Meza concocted a deliberate and calculated plan of deception and confusion.”

She says the incident is a horrible tragedy “that will never be forgotten.”

“A painfully difficult chapter in my life with horrible images attached.”