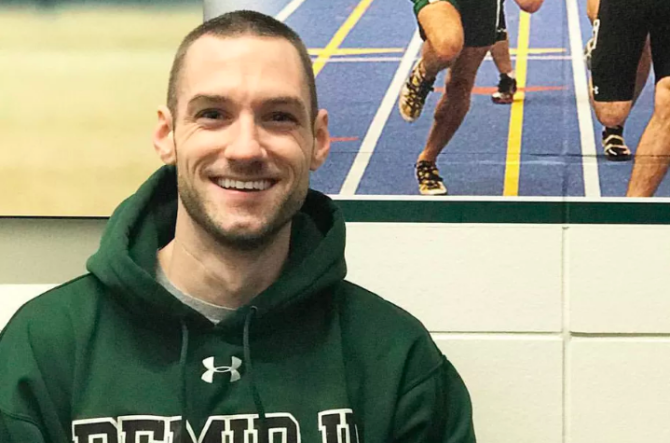 According to the National Alliance on Mental Health, LGBTQ individuals are nearly three times more likely to experience depression and anxiety, and for LGBTQ people ages 10 to 24, suicide is one of the leading causes of death.

25-year-old Lars Egge knows these feelings all to well.

“The night before I came out, I attempted suicide,” he writes in a powerful new essay published by Outsports.

Egge is a former member of the track & field team at Bemidji State University in Minnesota. At the time, he was 19, closeted, and severely depressed.

“My mental health at that time was diminishing,” he recalls. “It just felt like everything was weighing heavily on my shoulders and my world was crashing in.”

Related: How this teen athlete used weightlifting to overcome depression and accept his sexuality

Sitting in his dorm room, Egge downed a bottle of pills then texted his friends to say “This is it.”

Before I knew it, a police officer was knocking at my dorm door. I was quickly rushed to a hospital in Bemidji. The rest is a bit hazy. I remember having horrible stomach pains, vomiting a few times. I remember being hooked up at an IV and other instruments. The next morning I was released to friend who had to watch me.

After hitting rock bottom, Egge decided he couldn’t keep his struggles quiet anymore. He called his parents and came out, then he posted an announcement to Facebook.

“This secret I lived with my entire life was now out there,” he writes, “and there was no turning back.”

But instead of feeling better, coming out only made Egge feel worse, even though his friends and family were supportive about it.

That’s the thing about mental illness, it’s not always rational.

“I convinced myself that everything was going to go downhill now that I was out,” he writes. “I thought because I announced that I am gay, the opportunities in life were not going to be there for me.”

Related: This college track & field star thanks a $700 vacuum cleaner for helping him to come out

A few days later, Egge attempted suicide again. He was rushed to the hospital, where he was placed on 72-hour hold.

I was under constant watch. I had a variety of meetings with doctors, medical staff and university officials. There was a seemingly unending stream of tests and other screenings. My mother visited me there in the mental hospital. Seeing her and watching her break down in front of me was unbearable.

After his recovery, he reconnected with his old high school track & field coach, Coach Wieker.

“He had coached my 4×400 relay teammates and me to a fourth-place finish at the state meet,” Egge recalls. “He reassured me that he did not care about the fact that I’m gay, and that he still respects and supports me for the person and athlete that I am.”

Not long after that, Wieker offered Egge a job working alongside him at the high school.

The reason I coach is to help give back to those coaches who have helped me become the person I am today. I also aim to recognize the potential in athletes who do not necessarily see it in themselves and help them grow to become successful athletes on and off the track.

Wieker has also begun working with Egge to prepare him for the Paris 2018 Gay Games.

“What happened to me six years ago really opened up my eyes,” Egge concludes. “I do not want to ever go down that dark path again. It definitely changed me and molded me to become the person I am today, and I would not trade that for the world.”

“Life is so precious and can be taken away at any moment. Today I am happier than ever and really excited for what the future has in store for me.”

3rd anniversary of coming out of the closet!

No fear, you're gay superhero is here!

Haha I had to, selfie Sunday ha!