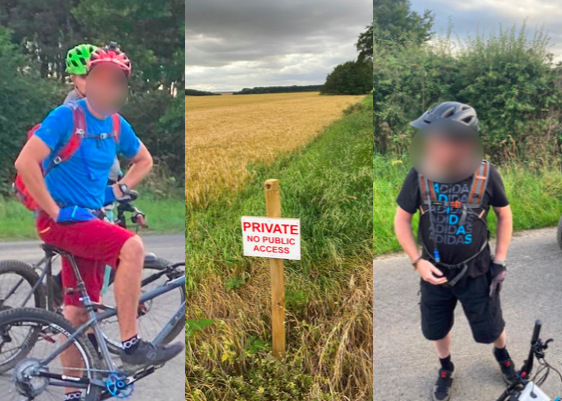 A gay couple from the U.K. say they were accosted and had their car damaged by a group of homophobic cyclists after asking them not to bike around their private property.

The two men, who have asked to remain anonymous, live on a rural farm that is only accessible by a private road, Grimsby Live reports. There are signs all over indicating that the road is not for public use.

But this didn’t stop a group of cyclists from blowing past the signs and shouting homophobic slurs at the couple when they asked them not to trespass on their land.

“When we told them it was private land, some of the group left, but a lot stayed behind,” one of the men says.

Later, he says, they tried leaving their house to go shopping, by the cyclists blocked the road.

“We asked them to move and one guy went from 0 to 100 and started shouting loudly at us and got in our faces. He also tried to damage the car, including trying to rip our wing mirrors off, which we are now having to get fixed.”

The man continues, “Another man started giving us homophobic abuse and started shouting slurs at us.”

“There were only two men giving most of the abuse, the rest just stood there and let it happen, and I think that can be just as bad. Surely one of them could have stepped in?”

Police were called, but by the time they arrived, the cyclists had taken off.

“When the police arrived we gave them the photos and explained what had happened, and they labelled it as a hate crime, which they are now investigating,” the man adds.

The couple says walkers and bikers will occasionally come down the road, but most people apologize and turn around when they realize they’re on private property.

“This is the first time we’ve had someone being so violent and homophobic about it,” the man says, adding that there was “no need” for the cyclists to behave the way they did.

“There’s a public bridleway a couple of minutes away from where we live which cyclists use all of the time,” he continues. “They had no right to be using the road, there are signs along it that say it’s a private road and it’s not for public use.”

A spokesperson for Lincolnshire Police said the department is investigating and are currently looking for the men responsible for damaging the couple’s car.

“The victims were also subjected to homophobic abuse meaning we will be dealing with this as a hate crime,” police say. “Anyone with information as to the identity of the offenders is urged to call.”