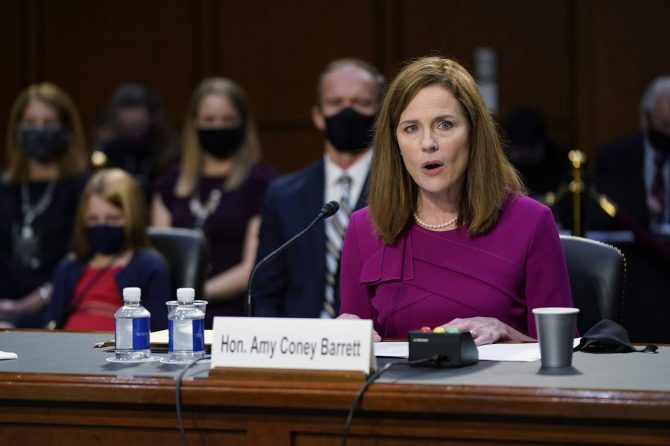 During her confirmation hearing this morning, SCOTUS nominee Amy Coney Barrett implied that being gay is a choice when she repeatedly used the antiquated term “sexual preference” to dodge questions about marriage equality.

Asked by Sen. Dianne Feinstein about whether she shares the same homophobic beliefs as her legal mentor, the late Antonin Scalia, Barrett refused to answer the question, then said:

The term “sexual preference” is typically used to suggest that being lesbian, gay or bisexual is a choice and therefore can and should be “cured.” Sexual orientation is the accurate description of an individual’s enduring physical, romantic and/or emotional attraction to members of the same and/or opposite sex and is inclusive of lesbians, gay men, bisexuals, as well as straight men and women.

Gay Twitter was not having any of Barrett’s coded “sexual preference” nonsense.

Sexuality is not a choice, but homophobia is.

We need a Supreme Court justice who will uphold individual civil rights and civil liberties.

Amy Coney Barrett bringing back “sexual preference” instead of “sexual orientation.” Not hiding her approach to LGBTQ+ rights. We are looking at a third vote to repeal marriage equality here.

Amy Coney Barrett called my gayness a “preference” this morning but still thinks she’s qualified to judge whether or not I can marry and what counts as discrimination. 🤡🤡🤡

Amy Coney Barrett doesn’t understand that sexuality isn’t a “preference.” You are born with it.

An example of a preference would me not wanting her homophobic, discriminatory mind on the court.

The fact that Amy Coney Barrett has used the outdated, loaded term “sexual preference” rather than “sexual orientation” (as if we had a preference: Mayonnaise or Miracle Whip, paper or plastic) clearly is indicative of where she stands. I predict tough times ahead for LGBTQIA. 🏳️‍🌈

A photo of my wife and I just reflecting on our “sexual preferences”. #AmyConeyBarrett pic.twitter.com/GdwHyypKGQ

Amy Coney Barrett allegedly won’t discriminate against LGBTQ+ people but called it “sexual preference” at this morning’s questioning. That’s because even though she may not “discriminate” she sure as hell will use the law to do so. #BlockBarrett #SCOTUSHearing

It’s been more than 2 hours since ACB referred to LGBT using the term “sexual preference” and I can’t get it out of my head. It’s pejorative, disrespectful & always used in a calculated way to reinforce discrimination. And this person may be deciding my rights??? #AmyConeyBarrett

Amy Coney Barrett’s kids will have to hide their “sexual preference” if it is anything other than straight.

Y’know what? I’m totally down for packing courts with people who understand, at the bare minimum, that my identity isn’t merely a preference. #AmyConeyBarrett

Choosing chocolate ice cream over vanilla is a preference

Being gay is who I am. Me loving who I love, it just is

I understand she doesn’t get it. Because she obviously prefers not to

Amy Coney Barrett referring to sexual orientation as “sexual preference” is really all I need to know about this woman.

In addition to frequently citing Scalia as one of her greatest influencers and using terms like “sexual preference” when talking about LGBTQ people, Barrett has close ties to the antigay hate group Alliance Defending Freedom, where she has given five paid speeches over the past decade. The group’s leader, Michael Farris, attended her nomination ceremony on September 26 that resulted in several members of the White House, including Donald Trump, contracting coronavirus.