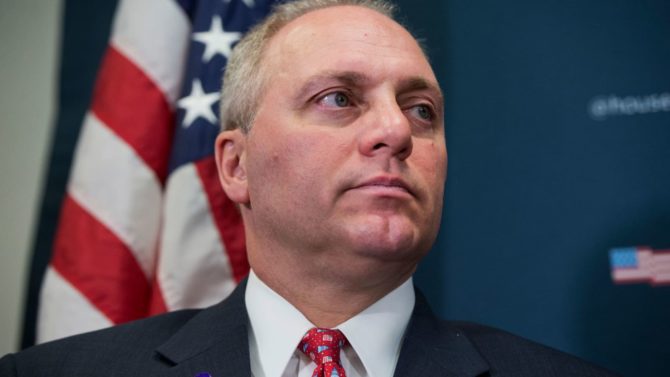 Americans have a lot to be outraged over. A nightmarish initial federal response to the pandemic and the Capitol insurrection immediately come to mind. Or, according to Rep. Steve Scalise, democracy?

The noted antigay Republican from Louisiana fired off a tweet Wednesday night after the House passed the For the People Act, a sweeping bill that seeks to affect campaign finance, voting and ethics laws.

The bill would expand early voting, initiate automatic voter registration nationwide and restore the voting rights of the formerly incarcerated, among other things.

“Every single American should be OUTRAGED by this:

Every single American should be OUTRAGED by this:

Well, as it turns out, every American is not outraged by the prospect of the government making it easier to vote. Imagine that.

Every single Aerican is outraged at YOU. You want to prevent people from voting. "Voter ID" is a barrier, and you know it; ballots are completely identified and crosschecked with bar codes. Mail-in voting is completely safe. You know that too. Stop trying to harm America.

Steve Scalise is OUTRAGED by democracy. The GOP is literally trying to CANCEL our Democracy.#CancelCulture

I'm good with that.

I'm outraged that Georgia passed a law to arrest people for handing out water to voters who are waiting in line.

Every American should be outraged by the GOP wanting to make voting as difficult as possible for working people. You don't want people to vote Steve, you want YOUR people to vote – – white, privileged, elitist.

No GOP outrage, no investigations.

I’m outraged you incited an insurrection on the Capitol and keep fanning the flames. Then using those lies to suppress the vote. That’s what I’m outraged about.

Americans should be OUTRAGED that the GOP OPPOSES a bill that 67% of them support, including 57% (!) of Republicans. People *like* mail-in voting, curbing the influence of dark money & holding officials accountable for abuses of power.

Getting tired of politicians telling me what I should be OUTRAGED by. I can figure that out on my own. And I'll tell you what I'm OUTRAGED by. The events of January 6, 2021 and the Capitol Insurrection. I'm OUTRAGED by the insurrectionists & those who provided them with support. https://t.co/g2sjnzzPc2

I am #outraged that it's really ok for Republicans to try and disenfranchise whole cities of Black folk and we just move on because they were unsuccessful? The issue is they tried voter nullification & racism on a national scale.

The Republican party is a racist party. pic.twitter.com/hmw9rQBIcB