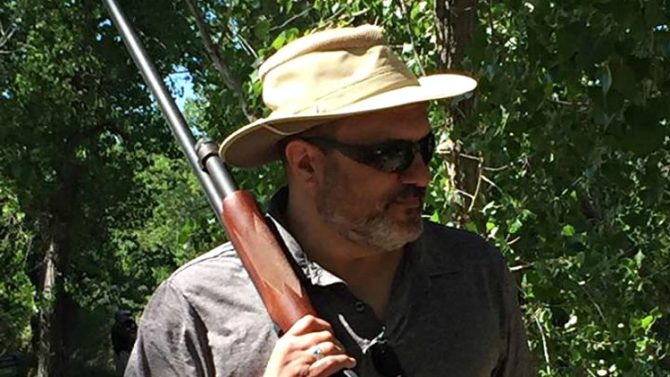 Now, the city is being sued.

Jon Caldara is the lead plaintiff in a lawsuit against Boulder’s recently enacted assault weapons ban.  He believes the ban isn’t just an attack on the the Second Amendment, but it purposefully discriminates against gun owners like himself in a way that would never–never!–be tolerated if the people targeted were, say, gay.

“Boulder has traditionally tried to welcome different people to the community,” Caldara tells local media outlet Westword. “It had a registry for same-sex couples before they could legally marry, so it helped people get out of the closet.”

He continues, “But what Boulder is doing now is putting gun owners back into a closet. And that goes against everything Boulder claims to stand for.”

Wait… what? We’re not quite sure we see the logic here.

Neither does Boulder City Council member Sam Weaver, who voted in favor of the measure. He says Caldara and friends are merely “throwing spaghetti at the wall to see what sticks.”

“They’re attempting to make this a federal case, but I think most of that is going to be tossed out on the face of it,” Weaver says.

But Caldara insists, “This is an attack on a political minority that the Boulder elite finds dirty, ignorant and dangerous!”

“The message is pretty clear: ‘We don’t want your type in our lily-white, elitist town, so we will bully you out. We will separate you. We will force you to self-identify. You have to pay to go to the police and get a permission slip and be on a watch list just because of who you are and what we believe.'”

In an email to Westword, councilwoman Jill Grano, who initially brought the ordinance forward, explains:

What does Caldara have to say about this?

“I’ve never felt as a gun owner that I was a politically bullied minority until now,” he says. “[Boulder] used to be a tolerant place, but now it’s intolerant and it’s hateful.”

Related: 5 examples that prove the NRA hates LGBTQ people as much as gun control