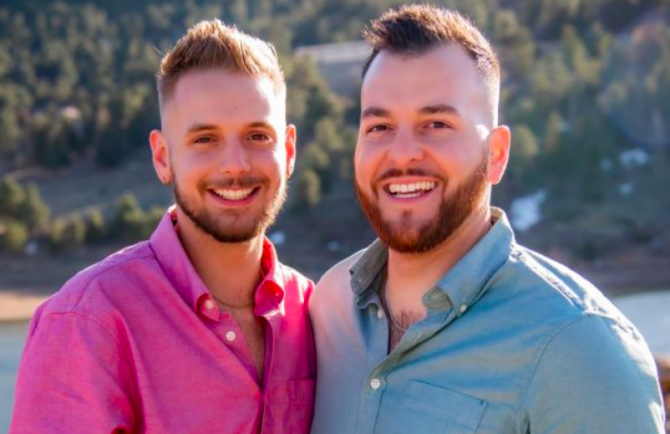 When Reid Alexander joined Tinder last summer, he never expected to meet his future husband and find a new kidney at the same time.

“I had to grow up and take my health serious,” Alexander, who was was diagnosed with a renal failure disease when he was 17, tells his local news station.

Alport syndrome is an inherited disease that attacks the glomeruli, which are the tiny filtering units inside the kidneys. Currently, there is no specific treatment and doctors can only treat the symptoms and help slow the progression of kidney disease.

Most men with Alport syndrome reach end-stage kidney disease and kidney failure by their 40s or 50s.

In August 2020, Alexander decided to make a big change in his life. He packed up all of his things and moved from Indiana to Colorado, where he soon met the love of his life, a man by the name of Rafael Diaz.

A few days later, the guys went on their first date and, as Alexander puts it, “We’ve been together every day since. Literally, every day since we met.”

It was a perfect match.

The couple got engaged this past April. But just as their wedding plans began to take shape, Alexander had a major health scare and had to be placed on an organ transplant list.

That’s when Diaz checked to see if he could donate a kidney.

“He was very positive he was going to [be] a match,” Alexander says. “In the back of my head I was like, ‘It’s not going to work.’”

Turns out, the two were a perfect match. Again!

“Everything looks good, kidney’s working great,” Alexander says after the surgery, which was done on the eve of their one year anniversary. “He’s given me the opportunity to live a better life, a longer life, and now that I have a healthy kidney. We’re able to live our life to the fullest potential.”

“It’s not only for love,” Diaz adds. “We’re going to start to live this chapter in the life. If you can help someone else and give someone else life, do it.”

Since the surgery, the couple’s friend has started a GoFundMe page to help raise money to pay down their medical expenses. So far, they’ve raised a little over $11,000 toward a $15,000 goal.

Seriously, someone get the Hallmark Channel on the phone, because this story needs to be made into a movie.