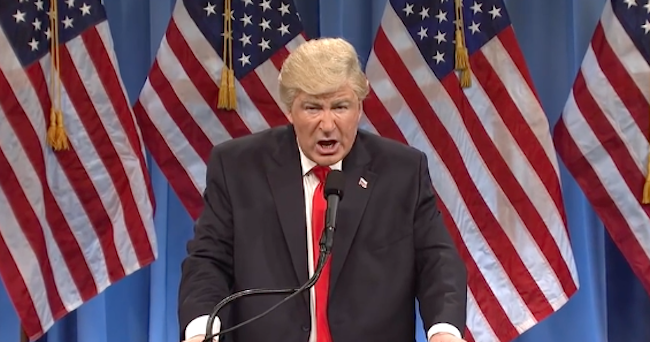 “I don’t know how much more people can take.”

That’s Alec Baldwin, who suspects everyone’s already way weary of all things Trump, including his impersonation on Saturday Night Live.

“Trump just overwhelmingly lacks any sportsmanship,” he tells Extra‘s Mario Lopez. “He remains bitter and angry, and you just want to look at him and go, ‘You won!'”

That’s why he doesn’t see his impression being too long for this world.

Baldwin told Extra‘s Mario Lopez that he’ll probably not do the impression much longer, because “I don’t know how much more people can take.”

“I think the maliciousness of this White House has people very worried, which is why I might not do it much longer, that whole impersonation.”

Much like everything that pours out of the real Donald Trump‘s mouth, we’re not sure we believe him one bit.

Asked whether there’s any chance he’d actually show up at the White House Correspondents’ Dinner in Trump’s place, he says:

“I don’t think that they want that. If they wanted me to do it, I would probably do it, but I’m not quite sure they’ll do. I think they may have a whole other idea.”