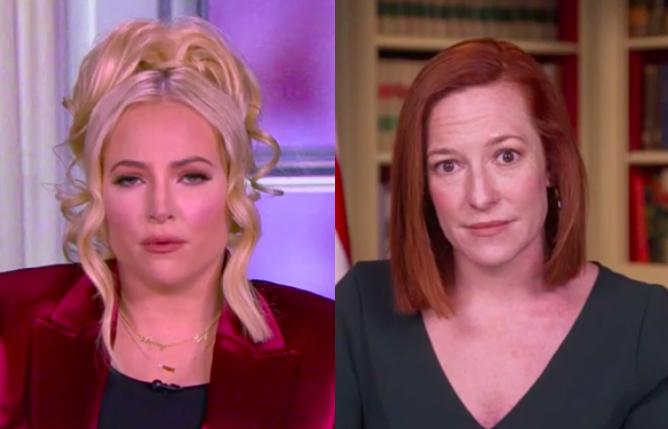 John McCain’s daughter demanded to know how President Biden reopening a HHS facility was any different from Donald Trump separating kids from their parents in detention centers.

Related: John McCain’s daughter is being annihilated on Twitter after calling the manager on Dr. Fauci

“It is absolutely not the same thing, Meghan. We are not ripping children from the arms of their parents,” she explained. “That is horrible and something we saw in the last administration.”

She then went on to say that the Biden administration is committed to figuring out “how to treat them humanely and keep them safe” and not just lock them up in cages indefinitely as the Trump administration did.

Psaki continued, “And in a time of COVID, that means we needed to open an additional facility so we had to have educational services, so we could have legal services and medical and health services and have those kids there treated humanely until we can find proper homes, family placements for these kids.”

Then she called the situation is “incredibly difficult” and “heart-wrenching” but said it was “the best decision we could make to keep these kids safe until we can get them to the right places and the right homes.”

Related: Meghan McCain, who hates cancel culture, is blocking her critics left and right on Twitter

Not satisfied with the answer and clearly not understanding the complex nuances of the situation, McCain rudely said, “I just want to know are you or are you not detaining children in a different facility.”

To which Psaki responded by informing her that the facility has been completely “revamped” and “redone” and again reiterated that it takes time to find safe homes for roughly 600 displaced children.

“We can’t send them directly to families that haven’t been vetted,” Psaki said, adding that the Biden administration has put an end to the practice of separating children from parents at the border.

.@PressSec defends Biden admin’s decision to reopen a migrant facility for unaccompanied children, telling @TheView it’s “absolutely not the same” as Trump’s policy and was “best decision” to “keep these kids safe”: “We are not ripping children from the arms of their parents.” pic.twitter.com/OFFOV7ty7C

Here’s how folx have been responding to the heated exchange…

Jen Psaki is handling Meghan McCain like a boss. #theview

Jen Psaki taking Meghan McCain down with simple semantics. So refreshing to have a press secretary who doesn’t rely on untruths. pic.twitter.com/6RZxzt3fo8

Meghan McCain actually makes you miss the intellect of Elizabeth Hasselbeck on The View.

Why does #TheView allow #MeghanMcCain to disrespect the guests? Her constant anger, ignorance & refusal to listen when others are speaking is really disgraceful! Please correct this or let her off her contract so Barbara Walter’s legacy won’t be permanently destroyed! pic.twitter.com/bx3cpgLbuH

And AGAIN, Meghan McCain was JUST FINE with kids being in CAGES during Trump's CORRUPT and EVIL reign! SHUT UP!!! #TheView @MeghanMcCain

Yeah so the press secretary-Jen Psaki- just had to put Meghan McCain in her place because Meghan is such a horrid person. LAWD. #TheView needs to get rid of her. There are other conservatives they can choose from. She is so rude. Geez

Meghan McCain is DEFINITELY having a bad week. From the hair, makeup and constantly being read and dragged on social media. #TheView pic.twitter.com/dUyKPClvPe

Is Meghan McCain doing this to herself? I don’t understand ? #TheView pic.twitter.com/hblqmkDI4W